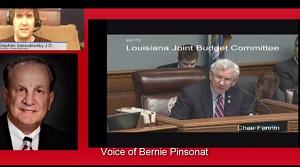 So, should the Louisiana citizens be so pessimistic?

Here is Part I of a multi-part telephone interview segment of "Bernie Burns"--we did today with Bernie Pinsonat, pollster and political analyst.

Part II will be published Monday.

SABLUDOWSKY:The legislative session coming up, what's your take so far

PINSONAT: well, it could be one of the worst sessions I've ever witnessed, and there's a lot of negativity to say the least surrounding the potential outcome, normally these things go to the last 20 days of the session, maybe 14 days and then there's, the legislators come together and they come up with a plan, they trade and deal, go for this and go for that and then all of a sudden the last 10 days or so, a budget finally emerges and everybody can agree on it and it passes, but this is a little different.

PINSONAT:You've got a lame-duck governor, you've got an enormous deficit of 1.6B and the backdrop is, this isn't the first year, this has been going on for five or six years so the previous cuts make any cut, this 2015 session, have a greater impact than any time with ever seen.  I don't know if there's ever been a session like this where with had five or six years of deficits and then we go into the last year, which is the worst year you can pick the when the governor is reaching the lowest point in their popularity, their ability to get things done and you have a $1.6 billion deficit you got the anti-tax moods, you've got the realization of these cuts cannot be avoided , you can only move so much money around, you can only use so many accounting gimmicks and this, this is the backdrop this time, so it's an unusual and unique situation for Louisiana.

PINSONAT:And none of us who have been doing this for a while has ever seen a session approach with so many dark clouds. And I'm sure the public is probably a little immune to this I might add, we've been saying this is horrible, how will Jindal get out of this, how will the legislature, when will the legislature finally break free from Jindal and do their own budget and all of those, all of these discussions which have been--receive a lot coverage for the last four or five years and none of them really materialize, something always came together something was passed and pundits and myself included on particular aspects of the budget--say they did this and they don't like that and they took money from this pot and they moved it over here--but the public, by the way, really, is not really engage to the minute details.

PINSONAT:All they know is that the budget eventually passed, they may have used accounting gimmicks but it wasn't traumatic, horrible cuts to the extent that were facing this year and they weren't asked to pay more taxes, so they listen, they paid a little attention and nothing happened so, this year is another one of those years--  the consequences are far more grave as far as to be concerned.  But I'm not so sure that the public believes that it will eventually happen, they've heard it so many times now, they're probably a little immune to it so we'll see if the public picks up on this and how this eventually plays out but it's not a great, the outlook is certainly grim at this point in time

More in this category: « Louisiana social: Moret own voice, Jindal defends, Chris Rose, Harry Reid going Harry Reid the handwriting on the wall, and saw defeat, in 2016 »
back to top