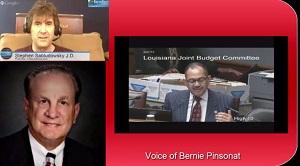 While the news media focuses upon the major Louisiana budget gap of roughly $1.6B, hard decisions need to be made, within a backdrop that voters might not understand the enormity of the budget cuts needed and the changes that need to be made to get through the upcoming legislative session.

In part 4 (below) of “Bernie Burns”, Bayoubuzz publisher Stephen Sabludowsky, asked Southern Media and Opinion Research pollster, Bernie Pinsonat, about a recent LSU survey that underscores the reluctance the voters might have to making major changes in the way the state does business.

Part 3: Pinsonat: Never have we faced this type of Legislative Session in Louisiana

SABLUDOWSKY: So I need to, sort of, punctuate that if I might and that is, I read yesterday, that LSU  had done a survey and apparently the state, the voters are, they don't want to get rid of some of these business tax credits and, roughly, what--500 million dollars of Jindal's plan, is to, I guess, remove the inventory tax credit refund-so, I'm just wondering, how in the world are we going to get out of this mess because if the state doesn't want to fool around with those tax credits or any of the business tax credits, then how do we going to go forward?{snippet 192}

PINSONAT: I don't care what the survey says, I don't think they legislature is going to be influenced.  And I think you could have worded the questions a little differently--movie tax credit, solar, inventory-- all that stuff, maybe there is a better way to ask it--based upon reality and the background based upon what the choices are verses that.  And, whether it's movie tax credit, solar or inventory, fees or whatever else you want to see LSU lose--not have a (inaudible) school, do you want to see, a couple hundred thousand, I mean do you want to see seven or 8000 city employees furloughed, do you want see drivers license--so that's a poll done and in and of its own and I wouldn't pay attention to it if I were a legislator, that's one of those where the questions asked without the backdrop of reality, I'm not so sure it reflects... Look everybody wants everybody to have something but at some point in time somebody has to pay something and I keep using the term cobbled together. I don't think there is a choice, but, if you go to let out one group and tax another, it's just common sense and political sense, the bottom line in this whole process is,  and I think you're going to see-- that's what the legislative leadership is looking at and that's where they're going to go

PINSONAT: Everybody has to pay something to get out of this mess, everybody is going to have to sacrifice something in it can't be where one industry pays the major share of it, it's just not fair..they did not cause this problem and you go after them and you punish them and everybody else. Everybody who's getting something from government, maybe, will probably call on to give up something--if you want to continue state services, they'll have to raise fees. Jindal might not like any of that but the question--is the legislature allow state services to be cut dramatically, will state employees be--I guess you'd say furloughed.  Can't even have a national election--those are pretty serious consequences. And that's probably just the tip of the iceberg. And the public may not be paying attention to it, as I've said, the backdrop of the poll is that most of the stuff we continue to talk about, the public says "well,this always occurs". Nothing bad really happens..Well it hasn't really sunk in yet

PINSONAT: The legislature knows, they can't wait for the public to sink in, they might not even believe that this will ever happen but the legislature has a greater responsibility and they don't have any choice. They going to have to cobble together something, that got to find a way, I guess you say, and get this budget to the next governor, in some kind of shape where he, whoever is the eventual governor is, will have an opportunity to restructure the spending priorities in the state, take a look at all the revenue measures, take a look at the exemptions and come up with a new source for more balanced approach to revenue. Everything has to be on the table in this session and, to get us to the next governor some plan in February 2016 where the next governor can tackle the entire problem and restructure our, the income that the state receives,  but it's probably going to look a lot like what they do in the session.  And he'll expand on it and come up with a more permanent plan where we just can't keep going through this crazy outlook where every year we may be shutting down this university, this hospital, and all the consequences and it's not something that we're talking about, the public is not aware as to how much we've cut and really what kind of deficits we have standing and facing the next governor, so they don't pay-- what I'm telling you is, really the public doesn't pay attention to a lot of the stuff and they don't realize how much the budget has actually been cut and what are the consequences if we worked on a real cash basis and had to pay all the money back there we moved around--so the consequences are there and I'm not really worried about that poll, the bottom line is the legislature has a larger responsibility where they've got to find a real solution and tax credits is one of the solutions for any and everybody who's got them