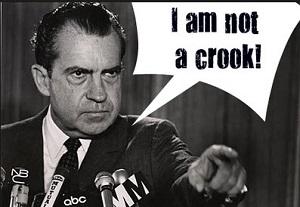 In the midst of an email scandal that will not go away, former Secretary of State Hillary Clinton is being treated with kid gloves by House Republicans.

Democrats know how to use a scandal to their political advantage. Look at what they did during Watergate and Iran-Contra. In contrast, Republicans are notoriously bashful about using their power to investigate scandals involving Democrats.

In this case, Hillary Clinton likely circumvented the Federal Records Act by using a private email system. After a subpoena, she destroyed 30,000 emails and wiped a server “clean” after refusing to provide it to an independent investigator. She claimed the server did not suffer any security breaches, but no one outside of the Clinton team was allowed to verify that statement. Along with her associates, she determined which of the 60,000 emails she sent during her tenure as Secretary of State would be presented to the State Department.

Of course, there is one set of laws from normal people and another set of laws for the Clintons. Hillary has been getting away with questionable behavior ever since she turned $1,000 into $100,000 in cattle futures.

In this case, her deception is even more of a problem because she is on the verge of announcing her presidential campaign.

Back in the Watergate scandal, Richard Nixon was pilloried by Democrats due to an 18 minute gap in what might have been an incriminating audio tape. It was assumed that Nixon discussed details of the Watergate cover-up during that infamous gap. In comparison, Hillary Clinton makes Richard Nixon look like an amateur. According to former Judge Andrew Napolitano, a Fox News contributor, “she could have taught Richard Nixon a lesson.”

Instead of the State Department determining which emails were private and which ones were personal, Clinton make the determination herself. In Napolitano’s view, “she disabled the record keeper from doing it because she was the record keeper.” Napolitano urged a prosecutor to have “enough courage” to charge the former Secretary of State with obstruction of justice and destruction of documents. Of course, in the Eric Holder Justice Department, no prosecutor will be charging Hillary Clinton with anything.

Napolitano says that Clinton’s actions are “ten times worse” than what General David Petraeus did in giving classified information to his biographer and mistress. While Petraeus pleaded guilty to one count of unauthorized removal and retention of classified material, Clinton will undoubtedly face no charges for her potentially criminal behavior.

In her news conference addressing the email scandal, Clinton claimed that she mixed personal and professional emails because she wanted to use only one device, a BlackBerry, for such communications. However, the Associated Press just learned that Clinton had an I-pad which she also used for email communications. In response to a Freedom of Information Act request, the State Department released a scant total of four Hillary Clinton emails, but those messages divulged a wealth of information, contradicting Hillary’s statements on the email issue.

Not only did the Associated Press learn that Hillary had another device for emails, it was also discovered that she mixed up personal and professional correspondence. In one email to her top assistant Huma Abedin, Clinton asked about “attractive boxes/baskets” among other house decorations. This response occurred after Abedin sent Clinton information about drone strikes in Pakistan. Obviously, Clinton’s email account was used for a variety of purposes and she could not keep track of her personal and work emails, which is why the entire server should have been made available to House investigators.

As in Watergate, the question remains, “What did Hillary know and when did she know it?”

To get some answers, Congressman Trey Gowdy (R-SC), Chairman of the House Select Committee investigating the Benghazi attack, has asked Clinton to appear before his members for a private interview. A better approach would be for House Republicans to stop the kid glove treatment of Hillary and demand that she answer questions under oath in a public hearing, just like Democrats have treated Republicans for decades.

In the view of Republican National Committee Chairman Reince Priebus, Clinton’s activities are “criminal in nature.” The only way to find out for sure is to put Clinton as well as her associates under oath. It is time for the House Republicans to start playing hardball with a woman who has used those tactics against her political opponents throughout her entire life.

More in this category: « Pinsonat: Shared sacrifice needed to fix $1.6B Louisiana budget mess No dynasty: Robertson clam ducks out of Indy Bowl »
back to top