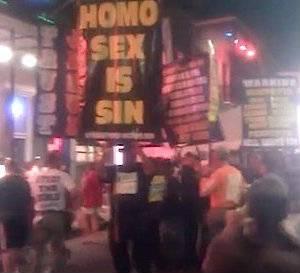 a friend wrote an article on this website defending the people who waved six-foot and eight-foot-tall signs displaying those sick messages in the heart of the french quarter during the southern decadence festival. he called them christian ministers exercising free speech who shouldn’t have been arrested.

i got two pieces of news for you, friend:

1. they’re not ministers in any decent sense of the word, they’re bigots waving bibles, as bigots do far too often; and

2. they weren’t on bourbon street to exercise free speech. they were there to provoke confrontation, affect public safety and intimidate.

this site offered as visual evidence a photo…a sanitized version of the bigots featuring some of the less disgusting signs.

take a look at this video, it shows the very real ugly words quoted above on signs large enough to obstruct views of french quarter balconies from street level. http://www.youtube.com/watch?v=zjqc29uSw7I

this isn’t really a free speech issue; it never is when the evangeliclowns bring their freakshow to the quarter. what it really is…is a cry for attention by pathetic, miserable small people who can only feel good about themselves by diminishing others. what’s on their signs and emanating from their bullhorns isn’t free speech so much as it’s hate speech.

for those who’d rather address the issue as a matter for high-minded constitutional scholars regarding rights, i offer the following modest proposal:

the bigots came to bourbon street specifically because they knew that thousands of lgbt americans would be enjoying themselves and celebrating peacefully. their intent was to disrupt the celebration. so, if what the pseudo-religious bigots were doing is constitutionally protected, then it must also be protected if a few dozen southern decadence participants were to interrupt the “ministers’“ so-called celebrations at their church picnics held within a public venue, waving rainbow flags, kissing each other, complementing the women on their shoes and singing gloria gaynor’s  “i will survive” through a bullhorn.

and then, as they say on ads for tv sitcoms, “watch the hilarity ensue!”

until that happens, i’m glad the dirtbags got jailed.

my friend was also apparently concerned that violent crime would remain wantonly unchecked if police spent their time arresting bigots on bourbon. i suggest that, not only did the arrests make the streets safer, they can also serve as a deterrent to the next uber-evangelical freakshow that rolls into town promoting hate for our fellow citizens. their behavior only encourages people who’d use their bastardization of the bible as reason enough to engage in acts of violence and hate against those whose lifestyle differs from these redneck idiots. we’ve seen too many lgbt youth and young adults beaten and killed just because of who they are. now that’s violent crime worth stopping.

kudos to the lawmakers whose actions nailed them, kudos to the police who acted in accordance with the law and ended the bigoted presence in the midst of a peaceful event.

what’s left? to sum up nicely, french quarter activist leo watermeier was reportedly quoted, putting the case of the biblical bigots very succinctly, when he said, "they don't have a right to force you to hear them speak.” sounds reasonable to me.