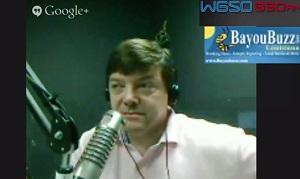 Louisiana elections, education, religious freedom and gay rights are in the air and on the airwaves.

Who is right?  Are Christians targeting gays?  Are gays targeting Christians?  Are we going down a slippery slope that both sides of the debate will regret?

Below is video segment of that part of the radio hangout today.

Today, LaPolitics reported that John Kennedy, the Louisiana Treasurer, will announce any day his future plans.  Initially, many believed Kennedy would be running for governor  That belief appears to have come to a screeching halt with David Vitter and others enterig the Louisiana Governor’s contest.  So, what is a candidate, with plenty money in the bank going to do if the top job were not to be available?

Governor? Attorney general? Re-election? The answer from Treasurer John Kennedy will be delivered in the coming days, possibly this week, according to talk circulating among donors. The smart money is on Kennedy running for re-election, despite his recent polling on other races, and then gearing up for a campaign for the U.S. Senate in 2016. Sources say Kennedy met last week with GOP ad man Fred Davis(@FredNDavis), whose California-based Strategic Perception won 12 of 12 in last year's federal cycle. The week before that, eyes and ears on the Hill passed along info about Kennedy's sit-downs with the National Republican Senatorial Committee and with the folks over at Karl Rove's American Crossroads, as reported by LaPolitics Weekly on March 26. These are big guns for a statewide run, leading to speculation that the treasurer really wants the seat held by U.S. Sen. David Vitter, should it become available.

Twitterland is always a good place to get the scoop.  Today, at time of publishing, here are some of the tweets which include a concern that Louisiana budget cuts to education could significantly impact Louisiana K-12 education.

RSD in New Orleans has $160 million in the budget for new construction while the schools/facilities under RSD in BR deteriorate.

I will ensure that there are convenient, service-oriented offices around the state. #TogetherLAStrong #LAgov davidvitter.com/together_louis…

Running for Lt. Gov of Louisiana requires more than a big fist...experience, brains, courage and commitment to... fb.me/4RiNla1a6