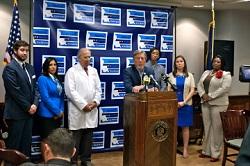 The Louisiana legislative session, days away from opening bell, is coming out “smoking” in favor of raising taxes on cigarettes.

A coalition of five major health advocacy groups  launched the “Invest in a Healthy Louisiana” campaign at the State Capitol in which the partners united in support of legislation by Rep. Harold Ritchie to raise the tax on cigarettes which in turn will save thousands of Louisiana citizens from premature death.

HB 119 by Rep. Ritchie, D-Bogalusa, will increase the tax on cigarettes by $1.18 a pack and bring Louisiana’s tax to a responsible level that will convince thousands of adult smokers to quit, and deter thousands of young people from ever beginning to smoke in the first place.

Louisiana’s current cigarette tax of 36 cents a pack is the second lowest tax of any state in the nation. Rep. Ritchie’s bill would raise the tax on cigarettes to the current national average of $1.54 per pack.

“The mission of the ‘Invest in a Healthy Louisiana’ campaign is to create a healthier Louisiana by reducing the burden of tobacco use through an increase in the state’s cigarette tax,” said Stasha Rhodes, of the American Heart Association.

The five major partners joining together to support Rep. Ritchie’s bill are the Louisiana chapters of the American Heart Association, American Cancer Society Cancer Action Network, American Lung Association, Campaign for Tobacco Free-Kids and the Louisiana Campaign for Tobacco Free-Living. The partners also announced the launch of the campaign website, www.investcampaign.org, in which advocates, volunteers and interested citizens can learn more about the campaign and how they can help in the effort.

A statewide survey taken in December showed that 70 percent of the people in the state support increasing tobacco taxes. Additionally, more than 64 percent said they even support an increase of $1.25 per pack on cigarettes.

Additionally, Rep. Ritchie noted that the state’s current fiscal woes should also cause legislators to take a hard look at raising the tax on cigarettes both for the immediate and long-term benefits.

“This is year that we need to take action,” said Rep. Ritchie. “Most importantly, we know that this legislation will prevent thousands of people from dying prematurely. In addition, it will generate millions of dollars that are sorely needed. “

Last year, 7,200 adults in Louisiana died from their own smoking. In addition, some 98,000 youth now under 18 in Louisiana will ultimately die prematurely from smoking.

According to projections compiled by the Campaign for Tobacco-Free Kids and the American Cancer Society Cancer Action Network, an increase of $1.18 per pack in Louisiana would have a significant effect on improving health in the state. The study showed that:

More in this category: « Treas. Kennedy back bills for state workers and retirees health insurance, OGB Louisiana 19th ranked state for being a taxpayer »
back to top