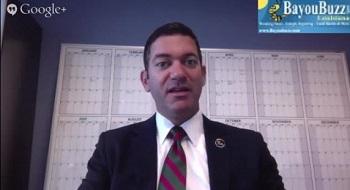 This is not like any legislative session.  The state has a serious fiscal problem.  It is $1.6B dollars short of expenses.  Many are wondering how the state will fix the problem, if it can.

For certain, there will a budgetary solution.  The state must constitutionally pass a balanced budget.  Thus, something, or quite a lot of services will be cut.

While the Louisiana higher education, hospitals, local governments and many systems and citizens are concerned about the outcome, the state survives in a parallel universe.  Due to a variety of reasons, the economy is strong, yet, not strong enough right now to take in more revenues for the state government to spend.

On Wednesday, Bayoubuzz publisher Stephen Sabludowsky, discussed the issue with Michael Hecht, President and CEO of GNO Inc.  Part I, below, focuses upon the extent of the budget problem and the upside of the economy.  WATCH THE INTERVIEW VIDEO, BELOW

HECHT: Well, 2014, Steve, was our best in our history here, and not just in the number of announcements but in the diversity of the announcements. There was heavy industry, international trade with companies like Chiquita, international Shipholding coming back. Yuhang Chemical major mainland Chinese investment in Louisiana. But there were also software like High Voltage software coming down from Chicago and then some different ones like Nest--an accelerator, incubator out of Finland--that's open up its second shop in the United States in New Orleans. And it's that diversity is going to make us, in the future, intolerant to shocks, like the oil shock that were going through right now. So, that was very good. Of course, the big recent announcement was Copa Airlines announcing that on June 24 they're going to restart direct service to Panama City and from Panama City you get a direct connection, without going through immigration to 51 destinations in Central and South America. So, in a very real way, the gateway to the Americas has been reopened. And we continue our talks to get a direct flight from London, that's actually going very well, our numbers keep getting better and better, our economic numbers, arEsce tourist numbers keep improving and I think pretty soon we'll be able to get our flight in the evening in New Orleans and land in Europe early in the morning the next day and that's going to take us from being a top second-tier location to a truly global destination for the first time in, what, many decades.

SABLUDOWSKY:So we really have something to look forward to and you're doing a terrific job as I have mentioned before. So the Louisiana legislative session, Louisiana is really in a critical time in terms of the budget. It's like two different Louisiana's is the way that I think that I've explained it and I'm sure that others have done so also. The economy is doing quite well as you mentioned but our government is not. We're flat broke. Were actually roughly $1.6 billion

SABLUDOWSKY: Yes we are. And the number is, as I appreciate it, the number that has been used in the media and the legislature has been $1.6B dollars which for a less than 25 billion-dollar budget, I mean that's pretty substantial so does GNO Inc. have say a policy position, a legislative position yet, or you're all, any type of programs that you want to talk about?

HECHT:Well we definitely have a framing, I guess you would call it, on the current session and, I think the point you made is an incredibly important one, to keep talking about, is that we have to unpack the very real public sector challenge with a deficit, unpack that from the very real private-sector progress . We want to make sure that when were fixing the public sector problem that were not undermining the private sector. We want to make sure that when we're fixing the public sector deficit problem, that we're not undermining the private sector progress--that we don't throw the baby out with the bathwater. And so that's what we're getting the word out about in terms of the public sector and the deficit what's causing this a number of things that have come to bear: The repeal of Stelly in terms of personal income taxes, the Katrina money being over, the oil price drop, the 2008 recession--all these things have come together-- what they mean is that will lost about 5 billion of revenue from the peak in 2008. At the same time, our spending, has basically been flat at the state level and that's why we have the deficit. Revenues going up like that, spending like that and you end up underwater pretty quickly. But, at the same time, you've got to look at the data and Steve you can look at the most basic data, non-farm job growth and you can see that for the four decades before Katrina, we under-performed the nation by half. The nation grew 80% we moved 40%, places that we compete against like Houston and Atlanta group 200%. Looking at the exact same data just going back to 2008, we have been performing alongside places like Houston and Atlanta. Houston and Austin, roughly, at the very best. So, It really is happening but again it take some time. When the governor makes an announcement about an 1000- person operation that's opening up--what's not said is that those 1000 jobs are going to come online in about 10 to 12 years. There is a timing delay. So people who have been demanding results of this growth today in terms of the tax revenue actually don't understand that were actually talking short-term future growth not immediate impact and so it's important to make sure that we get the timing in perspective.