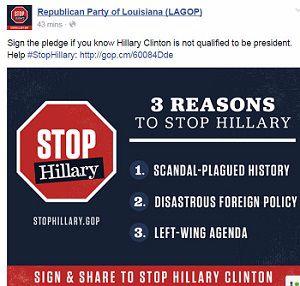 That is the message of the day for Republicans throughout the nation.  Stop Hillary Clinton.

It certainly has been the message in the various states, such as Louisiana, even hours after her Internet announcement today.

The Louisiana GOP has a special treat for those pledging to stop Hillary.  A bumper sticker, donning the slogan, Stop Hillary, of course.

The national and state parties did not have a monopoly upon getting out the message basically moments after her announcement.

In Louisiana, David Vitter, the Republican United States Senator, who is running for Louisiana governor, seized the opportunity to remind the voters that he was only one of two Senators voting to deny Clinton’s confirmation for Secretary of State.  Of course, Vitter also voted to deny any and everything President Obama has wanted since the 2008  election victory.

Some might wonder-- why would a Louisiana gubernatorial candidate be so visible right after a candidate’s presidential announcement.  Perhaps the answer might be that, as always, the Vitter email also included a request for a campaign donation.{snippet 201}

Vitter has not been alone wanting to stop Hillary in her tracks.  House Majority Whip, Congressman Steve Scalise  notified his campaign followers Sunday afternoon that Hillary must be stopped.   By the way, those agreeing can also click on Contribution to Scalise campaign link, for extra measure.

The republicans, as concerted its efforts in getting out the Stop Hillary message, enjoyed no monopoly in seizing the opportunities. Throughout the day, the Clinton campaign continuously tweeted out its own Hillary campaign message.  Included in the 140-carret bits of information are repeated requests for a small contribution among friends.

Which electronic medley of emails, Facebook posts, twitter money requests is prima facie evidence that those wanting to serve the public  know of the power of social media and online fundraising.   Candidates and parties everywhere can milking the electorate’s passions with any relevant announcement--squeezing every available drop of cash to help beef up their own mothers’ milk of politics cache.

More in this category: « Jindal’s refusal to release email simply does matter Jindal last legislative session speech gets panned, praised »
back to top