It's Jindal's time and things go better with Koch 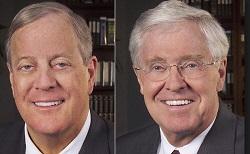 It's time for action.

Louisiana Governor Bobby Jindal might want to either double down on leaving Louisiana in better shape that it currently finds itself or somehow, he might want work the Jindal-spin to make himself more of a presidential contender than he really is--if the latest news out of Kochville USA means anything.

The USA Today interviewed Charles Koch, of the famous Koch Brothers Clan, who indicated that Team Koch has an “A” list of presidential candidates and the Louisiana governor is not on it.   He might not even be on “Team B”.   However, two governors are.  There’s former Florida Governor Jeb Bush, the heir apparent of the Bush Dynasty.  And, there’s Wisconsin Governor Scott Walker.  First-termers Senators Ted Cruz, Rand Paul and Maro Rubio, politicians who entered the national psyche under the Tea Party banner, along with Scott Walker, apparently are members of the starting lineup.  The rest are bench warmers.

According to USA Today:

Charles Koch said he is considering throwing his political might into the Republican presidential primary for the first time and is likely to provide financial help to several contenders before settling on a single candidate.

Koch, his brother David and their team have identified five candidates who have the right message and "a good chance of getting elected," he told USA TODAY in an exclusive interview atKoch Industries' headquarters. They are Wisconsin Gov. Scott Walker, former Florida governorJeb Bush and Sens.Ted Cruz of Texas,Rand Paul of Kentucky andMarco Rubio of Florida.

"Those are the ones we have talked to the most and who seem to be the possible leaders," he said.

"What we've told them all is that right now, we're not supporting anyone," Koch said. "We're telling them that if they want our support, one way to get it is articulating a good message to help Americans get a better understanding and a better appreciation of how certain policies … will benefit them and will benefit all America."

Based upon the most recent CNN/ORC  poll, Jindal still has a political pulse, but, it is so-very feint.

The Louisiana Governor is registering at 2%.  According to the Real Clear Politics survey, his average poll numbers is slightly less--1.7% of those polled.

The real problem for Jindal (and perhaps for Louisiana), is his popularity in Louisiana will almost certainly go down rather than up.  Louisiana voters are just beginning to wake up to the enormous problems the state currently suffers.  Jindal fatigue has not only set in, it is both exhausting and exhaustive.  You can bet that legislators will begin to distance themselves from the governor as time progresses down at the Capitol way.   Right now, there are no good solutions to fixing the budget fiasco.  With most sources of funding now spent or unlikely and with places to cut limited, the “Louisiana Hayride” is morphing into the “Louisiana Train Wreck”.

Those running for his bed at the mansion will really pound away at the governor like never before.   They see the vultures circling over the collective political caucus of the governor and the legislative bodies.   So do the hundreds of others running for a spot in state or local governments, this fall.   The current spineless leges will echo “the governor made me do it” as their campaign themes.   It will not be pretty.

For years, we watched David Vitter, Bill Cassidy, Jindal and others run against that boogey-man Obama, and win.  Jindal’s popularity has been lower than that of Governor Kathleen Blanco at the depth of destruction and despair due to Katrina, Rita and governments meltdowns.  Jindal’s reign, by contrast, has occurred during a period of national economic recovery (whether real, induced by cheap money, or not).   His low numbers exist despite his somewhat  exaggerated claims that Louisiana seems to be  becoming  the corporate headquarters of “Jobs’R us”.    Amid that backdrop of so-called prosperity,  Jindal will be Louisiana’s Obama.   However, it won’t just be one party and independents doing the finger-pointing or running the TV commercials associating the competition with the devil.  It will be a bi-partisan effort.

Jindal’s quandary is simple.  He needs to find a voice and start looking like a winner.  Time is running.  The big money is beginning to flow, the numbers of  prez-wannabees are increasing and future campaign teams are being drafted.

So far, all of his efforts to attract the Tea Party-types and the “religious-righters”  are doing zero for him other than making him look like an extremist.   Even the Koch’s don’t seem to be biting.   Scott Walker is outdistancing Jindal as the abled-governing Republican state leader and former Governor Jeb Bush owns the Bush birthright and sports a legitimate record to show, as evidence.

Despite the bogus claim Team Jindal has been making that his unpopularity is only due to his strident efforts to reform Louisiana from his populist past,  many local political watchers just aren’t buying.

They know that “Jindal-speak”  has become a new term  for someone who talks very fast, saying only what caucus and primary voters might want to hear and is predicated upon the slight of hands--do what I say, ignore what you see me do.

While Louisiana has huge obstacles to overcome in balancing the budget without eviscerating healthcare and higher education, the governor needs to move mountains.   With his flying around the nation, he will get blamed for the failures and the legislature will receive credit for the fixes.  His national image will continue to become a caricature of everything he told us the Republican Party must not be.

He not only represents the party at its stupidest.  He has become the stupid governor.

And worse, for him, the Koch’s and others really know it too.