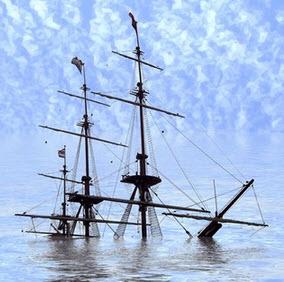 According to Robert Mann, who posted below in his blog today "Unless Gov. Bobby Jindal and legislators come up with a budget solution very soon, you can cancel just about every ongoing faculty search at LSU and watch as the exodus of faculty accelerates".

The blog is in response to an announcement that the university flagship, LSU, is sinking along with the other state universities due to budget cuts, so harsh, that the University is pursuing the option of bankruptcy.

However, others believe this maneuver is "hysterics" to force the governor and legislature to fund the university or to give the university an opportunity to fund itself such as controlling its own destiny in raising tuition rather than granting this power to the legislature.

Shipwreck or hysterics?  Tell us what you think?  You can use your social media access

LSU President F. King Alexander’s stunning announcement Wednesday that he’s drawing up official bankruptcy papers for the school is just one step short of naming the colleges and departments that he will close if the Legislature does not raise the funds to close the $1.6 billion budget shortfall for the coming fiscal year.

Unless Gov. Bobby Jindal and legislators come up with a budget solution very soon, you can cancel just about every ongoing faculty search at LSU and watch as the exodus of faculty accelerates.

Students, especially incoming freshmen who have offers from out-of-state colleges, will start bailing out, too, as it increasingly appears there could be no fall semester at the state’s flagship university.

As reporter Julia O’Donoghue wrote in NOLA.com on Wednesday:

Louisiana’s flagship university began putting together the paperwork for declaring financial exigency this week, when the Legislature appeared to make little progress on finding a state budget solution, according to King Alexander, president and chancellor of LSU.

“We don’t say that to scare people” he said. “Basically, it is how we are going to survive.

Moody’s Investors Service also announced this month (April 22) that it was downgrading LSU’s credit outlook from positive to stable, based on concerns about the the university’s overall financial support. A downgrade is LSU’s credit rating will make it more expensive to borrow money for campus building projects, and is another sign the school’s finances are in trouble.

Being in a state of financial exigency means a university’s funding situation is so difficult that the viability of the entire institution is threatened. The status makes it easier for public colleges to shut down programs and lay off tenured faculty, but it also tarnishes the school’s reputation, making it harder to recruit faculty and students.

Read the full story at this link.