Louisiana legislators should not get sidetracked over LSU President scare tactics 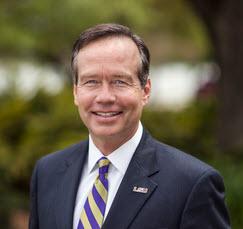 Even as the announcement serves as a scare tactic, the possibility that the Louisiana State University System and perhaps others higher education systems or institutions in the state could declare partial or entire financial exigency could pave the way to helpful changes – or simply make the problem worse.

LSU System Pres. and LSU Chancellor F. King Alexander announced that the system’s Baton Rouge campus was putting together plans for financial exigency, a condition that allows an institution greater latitude in making decisions about programs or personnel as a result of adverse financial conditions. By way of example, the LSU System receives such authorization from its Board of Supervisors for any of the entire system, institutions within it, or academic units within an institution, after an institution’s leader consults with the faculty and petitions. This allows, for example, for a school to furlough, lay off, or even terminate contracts with faculty members prior to these ending or in the case of tenured individuals to bypass other for-cause requirements for their discharge.

Of course, Alexander did not have to tell the world that he had asked the institution to begin drawing up such plans, so that served as a public relations move more than anything else (affirming this primarily was a scare tactic by adding “We don't say that to scare people”). He piled on with the imaginary terrors by stating “You'll never get any more faculty” if declaring exigency and lamenting that, at budgeted levels without changes in current revenue-raising capacity for the state of which the Legislature is trying to alter, the taxpayer portion per LSU undergraduate student would drop to $660.

But that figure seems hardly credible. The budget as is reports that the LSU System, where about 73 percent of the student body attends the Baton Rouge campus, is down for around $56 million in state funding, or about $1,250 a student (including graduate students but excluding nonresidents). And that’s counting only the funds specifically allocated to the system, before general fund dollars are imported from the Board of Regents according to its formula, which would add another estimated (by proportion of students, which doesn’t even take into account that the per student allocation to LSUBR would be higher because it has the highest costs and the highest proportion of full-time students) $3,500 per student. Even subtracting out the assumed revenue changes that pump in around $400 million to the BOR number, it’s still $2,100 more per student. Alexander needs to explain how he’s getting this $660 figure when budget figures suggest it’s five times higher. (By the way, the flagship University of Oregon, which is under no financial difficulty as it proceeds under its relatively new quasi-privatization, gets about $3,000 per student from its state taxpayers for its students.)

More subjectively evaluable is Alexander’s claim that exigency will scare away future faculty hires. For the most part, that is sheer nonsense. With the social and technological changes roiling the traditional model of higher education, there has come a tremendous glut in available faculty, especially in the humanities and social sciences. Conditions may be tighter in the sciences and business, but if any school puts out in any discipline an open position, especially if for a tenure-track slot, with such a buyer’s academic employment market, you won’t be hurting for applicants. And, if nothing else, when the University of New Orleans had to turn to exigency after the hurricane disasters of 2005 and the Southern University System found itself declaring exigency a few years back, they kept finding plenty of applicants for the relatively few jobs they could advertise. To be charitable, Alexander greatly exaggerates the negative impact that exigency would have on faculty recruitment.

As it is, the question of whether to declare exigency is largely unrelated to the genuine problem facing Louisiana higher education – particularly at the senior level, there are too few students chasing too many institutions. That is a macro-structural problem that had Louisiana recently ranked 18th in per capita spending on higher education, while exigency deals with the micro-structure – how efficiently institutions go about delivery higher education. Yet obviously the micro considerations affect overall efficiency of the system independently of structural considerations, and therefore exigency can be a tool to system reform.

Unfortunately, it also can make matters worse. One might think, given the opportunity through exigency, that institutions would seek to pare away high cost, low return programs and people in order to set themselves on the surest footing for financial stability. Think again: politics seeps throughout academia, based upon personalities and ideology, and, with fewer market-based incentives to act otherwise caused by taxpayer subsidization, decisions often get made on these bases. So, using the latter as a hypothetical example, if you have a faculty member who costs about $5,000 per student, but who arrived in his tenured post more for political connections than any real demonstrated teaching aptitude and who visibly champions the prevailing orthodoxy to the approving noises of the faculty lounge, he might keep his job while the guy who costs about $225 a student, teaching far more of them, who came to tenure through the usual track, but who also dissents and visibly from the typical political liberalism that courses through academia’s veins (and who occasionally notes that the system president is wearing no clothes), that more productive instructor may not stay on.

This means in the final analysis that, should the LSU System or any other or any institutions get a declaration of exigency, there’s no guarantee that the cost-cutting actions that result will create any long-term improvement in higher education delivery in Louisiana; in fact, they could exacerbate some of the very conditions which have caused such inefficient delivery, in the aggregate, of higher education in the state in the first place. In that instance, whether exigency declarations should be feared or cheered is uncertain.

But policy-makers should not let themselves get distracted over this sideshow. They need to keep their eyes on the ball: Louisiana higher education does not have a revenue problem, it has a spending problem, and budgeting should come in the context of prodding the system towards reform that reduces the inefficiency, whether in how it’s structured or in how it delivers, that has brought it to this point in the first place.