Waiting for Kate Middleton's baby to slide to royal birthdom 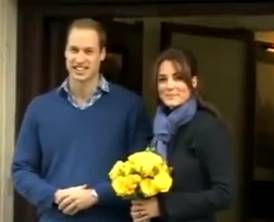 What do you do when you are Kate Middleton, married to Prince William, you claim you are pregnant, and you are now four days past your due date? http://www.celebdirtylaundry.com/2015/kate-middleton-induce-labor-st-marys-hospital-baby-birth-past-due-date/.

Why, take your toddler in hand and go to a petting zoo, of course! http://okmagazine.com/photos/pregnant-kate-middleton-prince-george-playground-photos/photo/1001239559/.

And by all means, go down the kiddie slide! Roll around in the hay! http://www.inquisitr.com/2044228/kate-middleton-prince-george-enjoy-petting-zoo-while-nation-awaits-royal-baby-2-photos/.

Don’t worry about your water breaking, or you being far, far away from your doctor. http://www.express.co.uk/news/royal/573417/Royal-baby-Kate-Middleton-Duchess-Cambridge-pregnant-birth-appearance-zoo-George-zoo.

It’s also a good place to go after Kate’s tattooed, balding and bearded Uncle Gary who decided to put out a public “hit” on a cyclist who apparently, accidentally smooshed his tiny pooch, Cheech. Cheech, a Mexican Chihuahua barely bigger than one of Kate Middleton’s teensy handbags, appears to be recovering– Yay! http://www.dailymail.co.uk/news/article-3054600/Duchess-Cambridge-s-uncle-Gary-bust-headphone-wearing-cyclist-ran-pet-chihuahua.html.

But Uncle Gary still put the word out on Twitter, a la good-old-bad-days gangster, John Gotti, that the cyclist was a “s**t” and Gary would run him to ground, and make him pay. http://travel.aol.co.uk/2015/04/25/kate-uncle-cyclist-runs-over-chihuahua/.

But we are not convinced. Is there a dark, maniacal side to Kate’s bouncy Uncle Gary Goldsmith?

What’s going to happen when young Prince George gets trounced on the cricket field or shoved about on the playground– events that happen when royals, or anyone, decide to live a “normal” life? Will Uncle Gary tweet instructions for revenge? Put out tweets for revenge? Will the Daily News publish these? Will they put their star reporter on this big, big story?

But, back to reality, or whatever passes for it, in the increasingly unreal world of the Goldsmith-Middleton royals!

For in-laws of Prince Charles, who famously would tolerate even adultery but never the crime of talking to “the dreadful press,” the Goldsmith-Middleton clan seems markedly unconcerned about how putting out the “hit” on the cyclist who thought Cheech was a piece of garden hose will go over at St. James’s Palace.

But then, all the news is about Kate’s past-due date, right? http://www.mirror.co.uk/news/uk-news/royal-baby-news-senior-aides-5597081#rlabs=5.

I was 10 days past my due date before my doctor finally brought me in to be induced, and then they discovered my son was breach, so I had a C-section. But before that, I was so huge, with a baby who kept growing, that I could only fit into my husband’s clothes.

“Big” does not even describe what a woman pregnant past her due date is.

But the one thing I did not do was go down a slide!

Not that I couldn’t. I might have been able to squeeze myself in. But...why? It’s a small slide, granted, but it’s still a bit of a risk, especially when things are not going so normally.

But then, again, I really was pregnant. With a kid that came from my own egg and my husband’s sperm.

With Kate Middleton and Prince William, the world isn’t quite so sure about the “really pregnant” part.

A shop assistant, pestered by journalists who’d seen Kate shopping there just days ago, observed: “She looked so calm. You couldn’t really tell that she was pregnant because she looked so great.”
http://www.express.co.uk/news/royal/573417/Royal-baby-Kate-Middleton-Duchess-Cambridge-pregnant-birth-appearance-zoo-George-zoo.

Hmmmm.... It makes you think, doesn’t it? Focus on the “you couldn’t really tell that she was pregnant” part. Because honestly, for all the blither-blather about Kate Middleton’s pregnancy, she simply does not look pregnant, does she?

Just like the last time! When little brown-haired, brown-eyed George was born! I mean....uhm...well, he’s quite a little bleached blond baby now, isn’t he? Adorable, and I love him, dark roots and all! http://www.mirror.co.uk/news/uk-news/prince-george-prince-william-kate--5139412.

The Birth Truthers are out in droves, and they see a hidden hand hard at work, orchestrating things like St. Mary’s Hospital suddenly breaking out in the bubonic plague or some other dreadful bacterial disease or virus that may cause doctors to suddenly shut the whole place down. This, say the Birth Truthers, will enable Kate and William to stage a dramatic but oh-so-private “home birth” with Mama Carole Middleton taking charge, or a laying-in somewhere like a smallish clinic, where the surrogate and baby are either already waiting, and few questions will be asked. http://www.express.co.uk/news/royal/573285/Royal-baby-William-Kate-anniversary-Wednesday.
Or, better put, few questions will be allowed to be asked!

And although I keep telling those Birth Truthers to back away from my laptop, they are relentless!

And in this aspect, although I beg them to please leave my keyboard alone, I have to find that there may be substance to their concerns.

One thing any truly pregnant woman might do, if she is overdue, is move closer to the hospital where she plans to give birth, so that at least she is in the same city, just a short ride away. Wouldn’t this put Kate sensibly at Kensington Palace, then, where she has that insanely expensive apartment all fully furnished, and with lots of servants to wait on her? And if the unexpected happens while expecting, Kensington Palace is a place where there would be no end to the pots and pans of hot water and fresh towels and clean sheets and ice chips and secret this and secret that, and if she needed a ride to St. Mary’s or wherever, well, couldn’t that be just so much more speedily arranged? With motorcycle outriders! Footmen! Everything you need to safely get to hospital, on the double!

Maybe the bouncy ride back from the petting zoo to London in the Land Rover would jog the baby enough so that labor would start– an added bonus!

It all seems so odd.

Birth Truthers also speculate that perhaps the due date is being manipulated so that it lands on some important royal anniversary– like the Queen’s real birthday (as opposed to the summer holiday official one where they “troop the color,” which I have no real idea of what that means, but it involves lots of people on horseback, and looks just amazing). Or William and Kate’s wedding anniversary. Or maybe they were talking about the date astrologically forecast by Nostradamus for the coming of the Anti-Christ! http://www.abovetopsecret.com/forum/thread694231/pg1.

Birth Truthers are also starting to speculate that maybe, just maybe, the surrogate has decided to keep her baby. And then, what to do, what to do?

Why, call Uncle Gary, of course! He can put out a Twitter “hit,” and that will fix that.
Willy and Waity can’t just wrap up little Cheech in a nice white blankie and make a quick dash to the car, can they? I mean, they will have to produce a real baby, won’t they?

Even though I must say that little pooch, Cheech, is adorable!

These Birth Truthers then got into a big fight because some say that the date forecast by Nostracamus has already passed, and that is why Princess Diana complained that the Palace induced her labor with Prince William– not so that Charles could squeeze things in for his polo matches, but so that the Anti-Christ could enter the earth on the predicted date. http://royalgossip.forumprofi.de/index.php?topic=7216.60;wap2.

When’s Kate’s baby coming? That is what everyone wants to know.

Hopefully, Cheech’s vet is on his way right now!

More in this category: « Hanging Out With Politicians with Google Hangouts Politics Can Cassidy-Koch ties stop flood sinking Louisiana Demos, Landrieu »
back to top