LSU's financial sky has been falling 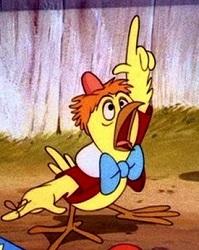 Chicken Little has got nothing on King Alexander.  The LSU president is shouting from the rooftops that the state financial commitment is crumbling to the ground, the LSU fiscal sky is falling, and he is about to declare “academic bankruptcy.”  Academic bankruptcy?  I’ve been around and a part of Louisiana state government for some 44 years, and I’ve never heard of the phrase.  You can’t even Google it and find any other example.

The LSU boss stirred up a real hornet’s nest of opposition with a number of voices, including many legislators, responding that Alexander was shooting from the hip and way overreacting.  LSU quickly backtracked and put out a statement saying they were merely preparing for possible “financial exigency.”  I haven’t heard of this one either, but the Prez is hoppin’ mad and want’s more money from the legislature for the state’s flagship campus.

Now in fairness to Alexander, he does have reason to gripe.  The Louisiana legislature has marched in lockstep with Governor Bobby Jindal’s efforts to strip higher education to the bones year after year.  The question is, just were has the educational establishment been all this time as funds were continually reduced?  The answer is simply that those who live off the higher education spout didn’t want to rock the boat and draw attention to the number of enormous salaries that are being paid, many for non-academic work.  Over two hundred higher education employees take in more than $200 thousand a year.

Presidents of even smaller Louisiana colleges average $350,000 a year.  LSU lists 13 Directors of Academic Affairs, each making over $200,000.  It can be lucrative if you can make it into the academic bureaucracy, so unless your job is at risk, there is little upside to “taking one” for the Higher Ed team.

But, you say, there are college boards and trustees, appointed from the business sector, that surely must be outraged and willing to speak up-right?  Hardly.  As the Wall Street Journal put it just last week, board members “have such an affection for dear old alma mater, and love those 50-yardline seats.  ‘Whatever you want to do Mr. President.’  And so it’s been observed a long time that colleges will spend everything they can get their hands on, in the absence of either market pressure or stewardship by a strong-minded board.”

A major mistake was made by the LSU leadership in the failure to develop a solid endowment plan. LSU could well have the lowest endowment of any major college of its size in the country. Endowments are important. As much as 20 percent of the total amount spent by major universities to cover costs can often come from its endowment. Income is built up over a number of years by actively encouraging alumni to make regular contributions to a university fund. Successful college endowments grow through investments and are a significant income source for any major university in the country. Not so at LSU.

As you would expect, the nation’s top-rated universities also have the highest endowments. Harvard leads the country with an endowment approaching $30 billion. A number of state universities have endowments that are significantly above $1 billion. The University of North Carolina has topped the $2.3 billion level gaining some 13 percent in one year on investments of new funds into the endowment. How about the Southeast Conference? Texas A&M is way ahead at $11.1 billion. Vanderbilt is solid at $4 billion.

The governor and the legislature both need to step up and see that adequate funding is available for all state universities.  But there is some internal soul searching and educational accountability that for years has been glossed over and ignored by the higher educational community.  There is more to leadership than just threatening that the academic sky is about to fall.

“Half the crowd in Tiger Stadium on a Saturday night can’t even spell LSU.”