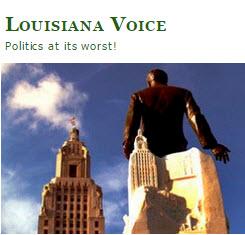 It’s funny in a sick, perverted kind of way when you think about it.

Come to think of it though, that’s entirely appropriate; the Bobby Jindal administration has been nothing but seven years of sick, perverted exercises in futility and failed policies. It’s enough to make other states laugh at us—and they probably are.

Foremost among his many efforts at “reform” preached by this incoherent governor is his insistence on something he refers to as “freedom of choice” for parents of students in grades K-12. http://www.breitbart.com/big-government/2015/02/10/jindal-urges-parental-choice-limited-government-and-end-to-teacher-tenure-in-sweeping-education-policy-plan/

Speaking at the Brookings Institute in 2012, he said the U.S. does not provide equal opportunity in education. https://www.youtube.com/watch?v=nDCU-VlSgX0

Yet, when it comes to freedom of choice and equal opportunity for students in Louisiana’s colleges and universities, Jindal appears perfectly willing to “let them eat cake.”

Even as LSU and other universities and colleges face financial exigency in the face of another round of budget cuts, this time as much as $600 million and as more than 1,000 LSU students marched on the State Capitol on Thursday in protest, where was Jindal?

Out of state, as usual.

Damn his blasé attitude toward doing his job as the elected governor of Louisiana at a time when the state is in dire need of leadership.

Damn his resolve not to repeal corporate tax breaks, his administrations’ failure to properly audit severance tax payments to the oil and gas companies who have bankrolled his campaigns to the tune of about $1 million.

Following the rally Thursday, dozens of students converged on the Senate Education Committee which was meeting in the bowels of the Capitol. The five committee members, who for the most part, talked among themselves instead of listening as a witnessed testified on a bill about student records, paid the obligatory lip service in welcoming the students and then politely suggested they move up one floor to the Senate Finance Committee “because that’s where the money is,” according to one member.

Except it isn’t there. There is no money because of Jindal’s haphazard, slipshod, snow-cone stand brand of administration.

One Education Committee member even suggested that the students keep going—up “to the fourth floor.”

“Except no one’s there,” said another member, eliciting laughter at probably the most accurate statement made thus far this session.

It’s not, of course, as though Jindal is solely to blame for this fiasco. The legislature is complicit in allowing him to run roughshod over the citizens of this state on his way out the door and (he somehow still believes) to the White House.

If you don’t believe the legislators must share the blame in this, then explain how an attempt this week to finally accept Medicaid funds to help provide health care for 240,000 low-income Louisianians never got out of committee. Explain how attempts to increase the minimum wage and close the gender wage gap fail time after time but somehow legislation to allow the teaching that the earth is only 9,000 years old passes muster.

Therefore, the protest by the LSU students, one of those demonstrations inspired by social media, was the perfect opportunity for the four announced candidates for governor in this fall’s election.

It would have been if they had all showed up. Perhaps that’s why State Representative John Bel Edwards (D-Amite) and the lone Democrat among the four candidates, got such an enthusiastic response from the students crowded onto the steps in front of the Capitol.

Lt. Gov. Jay Dardenne, the only one of the four to hold an undergraduate degree from LSU and a former LSU Student Government President was apparently so busy he could only send a representative from his office. A missed opportunity if there ever was one.

Edwards tried to downplay the significance of that. “Well, to be fair, I was already in the building,” he laughed. “I didn’t have to go far.”

But Public Service Commission member Scott Angelle and U.S. Sen. David Vitter also were conspicuously absent. Nor was a single member of the LSU Board of Supervisors in attendance.

Of course, it would have been a sham for Angelle to make an appearance. He is, after all, joined at the hip with Jindal. Granted, Angelle was a Kathleen Blanco holdover, but held over he was and Jindal even made him his legislative liaison. Jindal also named him as interim Lieutenant Governor when Mitch Landrieu was elected mayor of New Orleans, and then appointed him to the LSU Board of Supervisors (that’s the same board that fires LSU presidents on a whim, costs the state hundreds of thousands of dollars defending a defenseless attempt to deny access to public records, and which gives away state hospitals in a deal that had been rejected by the federal government).http://www.nola.com/opinions/index.ssf/2015/03/lsu_board_jindal_resign.html

But why Vitter didn’t show is something of a mystery; there were so many attractive co-eds at the protest, after all.

Edwards told the students that he has “spent seven years fighting Jindal’s budgets. I did not vote for the budget last year and my solemn promise to you is that I will never vote for a budget that cuts funding for higher education.”

Edwards, who holds his undergraduate degree from West Point, received his law degree from LSU Law School. He told the students they are facing the potential of a 90 percent increase in tuition this fall. As expected, that was met with a chorus of boos. “No state has cut funding to higher education more than Louisiana,” he said. “I have a personal interest in seeing higher education fully funded. My daughter is a freshman at LSU.

“If you look behind you, you see a statue of Huey Long,” he said. “Say what you will about Huey Long, but at a time this state was in the throes of the Great Depression, Huey Long found money to build LSU, build roads and bridges throughout the state and to establish a great state hospital system. If he could find money to do all that during the Depression, we should be able to fund education today.”

But as Jindal prattles on about choice for students of K-12, he seems to have forgotten about the choice of post-secondary students: the choice to obtain an affordable education, the choice to remain in Louisiana and attend a tier 1 university, the choice to avoid devastating student loans that put graduates in deep financial holes even before their careers begin.

More in this category: « Medicaid expansion for Louisiana still bad idea Jindal watch gets large, frequent focus in Louisiana, US »
back to top