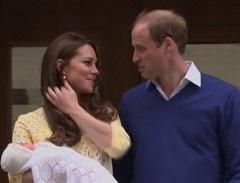 The Town Crier in his costume announced earlier today that Kate Middleton had “safely been delivered of a girl.”

But does that mean that Kate actually was pregnant and physically gave birth?

The Birth Truthers are sure she didn’t. They think the whole shebang with Kate going to a super-secret private room at St. Mary’s Hospital was just a super-hyped-up, staged production.

And apparently, they aren’t alone.

Reports from USA Today observed: “Kate looked fresh and relaxed as she held her baby in her arms. She was dressed in a yellow-and-white buttercup-print shift dress by Jenny Packham. Her hair was loose and flowing. She did not look as if she had just been through labor.”

Tittering tabloids also noticed, but explained it away be detailing Kate’s make-up details. “Did Kate really just give birth only 10 hours ago?” asked Hollywood Life. “The Duchess walked out the hospital doors and stunned the crowd with her flawless look.” http://hollywoodlife.com/2015/05/02/kate-middleton-beauty-look-after-birth-royal-daughter/.

For nine months, Kate did not look pregnant. Many newspapers and observers commented on it, all with a sense of wonder. And after supposedly breezing through a three-hour delivery, USA Today averred that “she did not look as if she had just been throug labor.”

Just before Kate somehow super-secret-squirreled her way into the hospital, the tattling tabloid, “Celeb Dirty Laundry,” says “Kate Middleton [is] Not Dilated Enough to Induce Labor.”

Birth Truthers agreed: “Well, of course Kate’s not dilated. You have to be pregnant in order for your cervix to be dilated.”

Me, I am trying to keep my eyes on the upcoming British elections. Have people forgotten that this is the real story happening in Great Britain now? http://www.cnn.com/2015/04/30/politics/uk-elections-david-cameron-ed-miliband/.

The British vote is to take place next week on May 7– the hugely important election that will determine the future of Great Britain, with the vote split almost evenly between liberals and conservatives, and formerly fringe political parties coming to the fore. http://www.cnbc.com/id/102634931.

Me, I am trying to stay neutral in all this “was-she-or-was-she-not-pregnant?” speculation.

But the Birth Truthers make it difficult.

Is it any coincidence, Birth Truthers ask, that Kate Middleton and the most skilled obstetricians in London have totally been unable to count to 280 days?

Because 280 is the number of days in a typical pregnancy. So what gives?

And how to get everyone– the new baby, perhaps the surrogate herself, Prince William, Kate, and those who assist them– in and out of hospital without a false step or being seen carrying something incriminating– was tricky. The papers claim that Kate made “a dawn dash” from Kensington Palace to the hospital. http://www.people.com/people/package/article/0,,20910362_20920215,00.html.

Not even the Union Jack flag wavers rolling around on the sidewalks saw her enter. http://news.nationalpost.com/news/world/royal-family-superfans-already-waiting-outside-hospital-in-london-749417.

I don’t run so close in step with the Birth Truthers, but I have come to respect them.

Take a close look at those loonies in place at St. Mary’s Hospital in Paddington– the ones who are wrapping themselves in the Union Jack, sitting in lounge chairs, sprawled about in blue-and- red sleeping bags, and snoozing in tents– waiting for any word about when Kate Middleton is coming to give birth. http://us.hellomagazine.com/royalty/2015042824896/kate-middleton-royal-baby-fever-in-overdrive/.

How generous is that? http://www.dailymail.co.uk/news/article-3058944/William-Kate-send-coffee-croissants-fans-camped-outside-St-Mary-s-Hospital-fortnight-awaiting-new-royal-baby.html.

But the point the Birth Truthers want to make is that some of the Union Jack tent-sleepers look like they are homeless, or at least jobless. They may be some kind of paid hangers-on group. Honestly– who can afford to take so much time off from work to sit on the sidewalk and chat with the police and take a potty break God knows where, and then sleep in a tent? One woman with yellow teeth and an entire Union Jack ensemble claimed she’d lived on the street in front of the hospital for over two weeks, waiting for Kate to deliver the new royal baby.

But for Birth Truthers, the dead giveaway that someone else other than Kate gave birth to the new princess was how Kate pranced down the steps in her high-high-heeled shoes, only hours after supposedly lying-in. http://fashion.telegraph.co.uk/columns/bibby-sowray/TMG11579463/Duchess-of-Cambridge-wears-Jenny-Packham-to-leave-hospital.html.

Another newspaper recalled how the late Princess Diana appeared on the steps of St. Mary’s Hospital with Prince Charles, holding William. There were “echoes” of Princess Diana, it claimed. http://www.smh.com.au/lifestyle/celebrity/royal-baby-kate-middleton-and-prince-william-leave-hospital-with-new-baby-girl-20150502-1myo7q.html.

But one big difference is that after giving birth to Prince William, Diana wore sensible flat shoes and (gasp!) support hose! Who can forget how gingerly she walked down the hospital front steps she made so famous? There was no doubt that Diana was a woman who had genuinely given birth to the heir, which is what the law of Great Britain requires for a child to be legitimately in the line of succession. http://imagebuzz.photoshelter.com/image/I0000qOUDOnh4mAk.

What can one say about the woman with the dyed dark hair who snaked so confidently down the very same steps, traipsing in high-high-heels, just a few hours after supposedly giving birth? Unlike last time, when Kate perplexingly showed a huge post-pregnant tummy, round and hard-looking as a pork belly pig’s, this time Kate wore a straight-shift dress and covered her tummy part with a long flap of the new baby’s blanket.

So if she was wearing her fake pregnancy prosthesis out of the hospital, this time, it was a lot less noticeable than before.