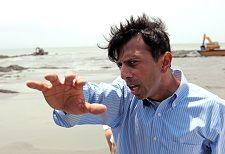 Our governor--author, columnist, TV talk show talking head, presidential hopeful, political minister of faith,  specialist in matters such as foreign affairs, Obama, Go Zones, national healthcare, Muslim religion, religious freedoms, Hillary Clinton and just about everything he has written or talked about over the past few years on his road to the WhiteHouse—is writing another book.

While he won’t be claiming he is faster than a speeding bullet, more powerful than a locomotive and able to leap tall buildings with a single bound, you can bet that our “superman” governor will be telling the world how his awesome powers can transform this country into the glowing "Metroplis" glistening on the hill.

God forbid if he wants to transform America as he has changed Louisiana over the past seven years.

Now, according to the AP,

“the Louisianagovernor and possible Republican presidential candidate, has a book coming out in October.

Threshold Editions announced Tuesday that Jindal has a deal with the publisher for "American Will: The Forgotten Choices That Changed Our Republic."

In a statement issued through Threshold, Jindal called the book a work of history and "a call to arms" for the future as he reviews events ranging from the Louisiana Purchase to the Cold War. In a reference to the next presidential election, Threshold's announcement notes that the book offers "dramatic tales that demonstrate the courage, faith, and vision that we need in 2016."

Jindal has said he will decide whether to run after the state legislative session ends in June.

A previous Jindal book, "Leadership and Crisis," came out in 2010.

So, I guess we should add American historian to his long lists of super talents and achievements.

While he surely hoping that many of us will buy his new book, ASAP (as soon as published), the one thing he probably won’t accurately discuss would be his record as Governor of the State of Louisiana.

That tome would be pure fiction.

And, for one, it would not give us an accurate account as to what he has done to earn that six-figure salary for the job he said he wanted and that he so loved.

He actually could not write an honest account about the “good” he has done for the state while we paid him handsomely.  However, he could write about how he used the credentials of the position to build his own national profile while deceiving the ignorant about the good he claims he has done.

Oh, the height of hubris!

While Louisiana suffers from a $1.6B deficit this year, after ransacking all of our savings to pay for past budget woes, our governor (again on our dime) will write a history book, probably run for President, and run his PAC and try everything he can to remain relevant on the national spotlight.

Meanwhile, Louisiana’s universities will continue to suffer the humiliations of closing down courses for its students.  They will continue to wonder how it can rebuild its bonding credibilities which has been severely compromised under his stewardship.

Our states’ healthcare system will continue to be so crippled by his self-professed healthcare expertise that more of our needy will be without basic healthcare while our state continues to be at the top of the lists of unhealthy states.

While he claims Louisiana’s economy has been booming under his policies, the truth will continue to trickle out to the contrary.  The world will soon discover that  Louisiana’s GDP has been 1/40th of that of the national economy over the past three years.  The world will discover that during the first few years of his administration, he benefited from the overwhelming support of Katrina money that swelled our budget and our productivity.  Once that money dried up, the state’s GDP nosedived, a fact he will never admit.

So, Yippee, our super-governor is writing another book.

His first one was written during the crises days of BP oil spill.  He told the world he was not going to write the book because he did not have the time.  Yet, he did.  While the oil was flushing upon our shores, while he was daily screaming at President Obama in front of the TV cameras that we did not have a second to spare, he wrote the book.  He named it “Leadership and Crises”--ironically, a great title to describe a man who has created a budgetary crises and who refuses to show any leadership in overcoming the obstacles.

As he pens about American history, if anyone wants to know his own history on the job, forget it.  He has created a fortress of steel around his communications and activities.  As a result, we will never know how he spent his time on the job or why he governed the way he did.  For those wondering, you might have to wait to see if he publishes those fantasies in another future book.

Unfortunately, if anyone is looking for help from the government body that is supposed to possess equal power, forget it.  His partner in crime continues its subservient ways.

As a public body, our legislature refuses to stand up to him and fix what he and they have broken.  They refuse to pierce his veil of secrecy shrouding his public records.  If you want transparency in the governor’s office, you’ll just have to wait until the next  man assumes the throne with promises made and probably shortly forgotten.

Worst of all, the legislature refuses to upset Bobby Jindal and hold him accountable for his so-called record.

Think about it.  If you or I failed to show up for our public job, we would be docked,  fired or in some cases, even jailed.

Yet, the legislature still allows our part-time governor to double dip while being paid for a full-time job he raised millions in campaign money to perform.

He has spent half the past year elsewhere, is on track doing much more of the same.

We cannot get records to see what he has been doing.

Ironically, we just put another public official into jail—Ray Nagin, the former Mayor of New Orleans.

Nagin, while presumably, on the job during the Katrina rebuild, was building his and his family’s wealth.

In that case, the media was able to get his records which helped the prosecutors’ case to put him away.

By contrast, the local media (and our legislators) can’t even get Jindal to stick around and answer legitimate questions about the current budget and legislative session. But, if you want to know about what he thinks, simply click the likes of Breitbart and other friendly media that parrot him as they help fuel his campaign persona.

No, I’m not saying he committed a crime.

However, what I am saying is this—what this man has done to the State of Louisiana and what our legislators have allowed him to do--is "criminal".

We are severely limited in obtaining information about contracts, about how so many of his contributors got jobs or appointments.

We will have better access to Hillary Clinton’s records than those of our own governor who also wants to be president.  Of course, in a huff of hypocrisy, our governor dissed Clinton on lack of transparency.

And, our legislature, who struggles on its own to make the budget numbers work,  continue to lack the gonads or the will to make this information available.  Yet, many of them promise us they will be mightier with the next governor, come January 2016.

Face it.  Louisiana has been taken and the charade of competent governance continues.h

Which brings me to the Superman motiff.

As one writer put it in his exceptional and powerful New York Observer article, “Why Bobby Jindal is Superman, sort of”:

A career that once stood for the wildest American dreams of immigrants’ children now looks like a different archetypal story: a story about the dangers and the limits of ambition. Seven years into a disastrous governorship, it now seems clear that Jindal never took seriously his obligations to his own state. Louisiana was another stepping stone in a career full of them—and Louisiana got stepped on.
http://observer.com/2015/05/why-bobby-jindal-is-superman-sort-of/#ixzz3ZHgbiZVf

The sad yet honest truth is—Bobby Jindal does have something in common with Superman—they both are characters residing in a comic book world of superheros make-believe.

Meantime, Louisiana residents can forget looking to him for help.

After all, he was, is and will surely continue to be a man possessing super promise whose own strength has been his Kryptonite.

What could have been a true symbol of truth, justice and the American Way, has become a tragic selffish-narcissist lacking in real character and much too weak to admit any failings.