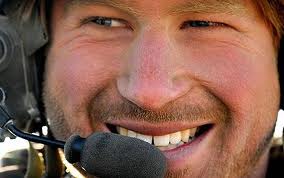 Will the Taliban carry out their stated mission to kill Great Britain’s Prince Harry?

They will certainly give it their best shot. And if the recent shocking murders of U.S. Ambassador to Libya Christopher Stephens and his staffers, and the violent assaults on U.S. embassies and consulates in Libya, Egypt and Yemen on the anniversary of 9/11 are any indication of what can go wrong going horribly, terribly awry in the West’s newest re-imagining of the Middle East and Central Asia, then Prince Harry is in genuine danger indeed.

And the Royal Family’s recent sending of the Prince–third in line to the throne-- into an army-based exile to Helmand, Afghanistan, will make it possible.

To be killed, you first have to be a target in range.

Commoner Carrie Lynn Reichert, who claims she romped with a naked Prince Harry in Las Vegas, has only been arrested, imprisoned, and banished to Mississippi, where she will face bad check-writing charges. Whew! There may be one or two Taliban in Mississippi somewhere, taking flying lessons or studying engineering, but they are likely hunkered down in trailer parks and donut shops for now, so Commoner Carrie is safe–or at least, safer than Prince Harry is right now. Although her warrant (now online thanks to the ever-helpful San Diego Sheriff’s Office’s website, "Who’s in Jail?") indicates that she is not yet eligible for bail, at least she’s not yet been dumped into the dregs of Helmand, where Prince Harry was recently spotted checking out the Apache attack helicopter he will reportedly fly in as a gunner on missions to kill as many Taliban fighters as possible.

Unless they kill him first, as they’ve threatened to do.

Helmand is Afghanistan’s largest province, a watery, soil-rich area whose biggest cash crop is opium. It shares a southern border with Pakistan, and tribes of both areas are renowned for their warrior traditions. It may seem like a wasteland to one coming from London’s poshest places, but if one were to drive a mere half-hour from Prince Harry’s Vegas home-away-from-home, the landscape would not be dissimilar. Hence, the California-Nevada area was likely an ideal place for Prince Harry to receive yet more "helicopter training."

But this training does not mean that the spare heir will survive an air-to ground strike from a tribesman, a Hellfire missile, a land mine, a hand-held grenade launcher, friendly fire from his fellow soldiers, or any other of the numerous ways that Western warriors end up either triaged or sent home for a folded-flag ceremony.

Unlike the super-stealth Black Hawk helicopters used in the raid to assassinate Osama Bin Laden in Pakistan, Prince Harry will reportedly be a gunner on the murderous work-horse Apache AH1, modeled on the U.S.-made Apache but modified with Rolls-Royce engines. It is a killing machine, plain and simple, with room for only a pilot and gunner, and the role of the gunner is to kill.

It is also a very costly killing machine–anywhere from $16.5 million to $50 million and up, depending upon with how it is armored and equipped, and then there is the matter of the second soldier on board. Does the British Army really want to risk so much life and treasure on creating a publicity stunt for Prince Harry to be a hero?

The trouble with Prince Harry is not just his Vegas "lost weekend," but the many evenings and early mornings where Harry is photographed staggering out of exclusive private clubs like Raffles, Boujis and Mahiki after swigging champagne and Red Bull vodkas, puffing ciggies, and sucking on "hippie crack" nitrous oxide, usually with a body guard picking up the rear. The guards are often caught staring like startled deers into the paparazzi’s flashbulbs, but Prince Harry’s eyes are usually barely open. In 2010, he caused concern when he walked headlong into a pole and appeared to pass out as he stumbled towards his car after a particularly long pub crawl. In 2009, he drunkenly displayed his left hand’s nails painted a shocking pink color. In 2008, Harry and a friend speeding over 100 miles per hour in their Audi R8 two-seater almost drove a family with a baby on board off the road. Having survived a close call with Prince Harry, the family was again terrified when they were forced to accelerate to over 100 miles an hour when the Range Rover carrying Harry’s body guards dangerously tailgated them in heavy traffic, trying to catch up with the Prince who was on his way to Boujis, where he reportedly partied until 3 a.m.. Often, Harry parties and does not attempt to return to wherever "home" may be until 5 a.m.. His nightly bar tab is rumored to be in the neighborhood of $15,000–which he obviously doesn’t drink all by himself.

No–Prince Harry parties with an entourage, and they are usually wealthy or at least well-heeled, and often from European royalty themselves. But they aren’t helicopter pilots serving in wartime, so they aren’t held to the same standards Prince Henry should be held to, if people care deeply about him remaining alive.

The British Army’s Manual of Aviation Medicine urges pilots, especially helicopter pilots, to reduce their alcohol intake at all times, but especially before going on a mission. It’s a long-term issue–not one where one can excuse a pilot going on a pre-action bender the week before. With typical British understatement, the Army Manual states: "The Apache is not just an air craft. It is a potent weapons platform, an airborne intelligence cell, and a battlefield management system. An enhanced awareness of SA [Situational Awareness] and the consequences of poor maintenance of SA will be required."

"Situational Awareness" means, frankly, you need to be sober, know exactly where you are and exactly what your mission is, and anticipate all that can screw it up.

In other words, if you booze, you can lose–lose your life, your comrade’s life, the costly helicopter, and who knows do what other kind of damage if you operate an Apache without taking responsibility for knowing precisely where you are and exactly what you are doing. In the recent Bin Laden assassination raid, one of the Navy Seal assassins expressed surprise that the specially-modified Black Hawk helicopter carrying him from Afghanistan to Bin Laden’s Abottabad, Pakistan compound was being flown by "an older man, maybe 50 years old." But that pilot expertly maneuvered into a small area of Bin Laden’s walled compound, and when things went wrong due to unexpected hot air current problems which caused the helicopter to pitch, drag its all-important tail rotor against the wall, and roll sideways, that "older" pilot was able to respond quickly and make a "soft" emergency landing so that the helicopter’s nose was buried in the ground at a 45-degree angle, while its rear rotor rested atop a retaining wall. Thanks to intensive practice, planning, and no drunken trips to Las Vegas, all the Seals aboard safely debarked with weapons, translator, and dog, and the mission to kill Bin Laden was carried out. One need not be a 50 year-old pilot to understand that weekly bouts of binge drinking and all-night debauchery, even with a few days reserved for sobering up, could likely jeopardize the safety and success of any mission.

One need only be a 28 year-old British royal who cares about himself and his assignment.

Recent photos of Prince Harry inspecting his Apache craft in Helmand show worry and bewilderment in his deep-set eyes, and a furrow in his brow, even as he unconvincingly gives the requisite "thumb’s up" sign. Life is suddenly becoming more real for him by the minute in Helmand. This can only be a good thing, in terms of him staying safe and alive. Third in line to the throne and now first in the Taliban’s firing line, it’s time for the party boy to become the serious man the Palace would have us believe him to be.

More in this category: « Poll: Romney or Obama, who’s better for US in Middle East? Isaac update: Friday Schedule for Louisiana Disaster Food Stamps, DSNAP »
back to top