Jindal Showdown at the Louisiana "Not Ok" Legislative Corral

What’s wrong with this picture?

Today, Louisiana Governor Bobby Jindal’s communications (press) office issued the below press release promoting the fact that Louisiana has another economic development medal it can pin on its chest.  Great news indeed.

The governor can cite this wonderful -- 7th in the nation awarded by Chief Executive--along with an outstanding “silver ribbon”, number 2  ranking awarded by the respected Site Selection magazine.

Both rankings will further the governor’s narrative when he parades in Iowa, New Hampshire and Fox News claiming Louisiana is an outstanding place to do business--ever since he took office.

Indeed terrific news for Louisiana and for Bobby Jindal.  Congrats to all involved.

Louisiana and North Carolina are not the only southern states that are so honored.

Actually, the South is “red hot”  and the economic temperature is “rising again”, at least in terms of site selection and economic development.

Seven out of the top ten states are within the Southern region and are doing substantially better than other states across the nation. 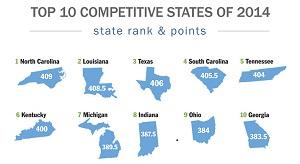 However, today is also a major turning point for the rest of Louisiana, including economic development.

While movies produced here are shooting, oil is gushing,  solar panels are shining and the respective industries are lighting up the stars, Louisiana government is dead broke.  The cupboard is empty.

Over the past years under the Jindal administration in particular, the state has given away the store in tax and other incentives to get business.  Not a bad idea.  In fact, early last decade, I came up and promoted the concept of  tax incentives for the digital media industry.  Likewise, I helped (with of course many others) its expansion.  I am told that business in that industry is booming.  So, tax incentives are good.

If the state can afford them.  As long as they do not devastate the other vital institutions in this state such as schools, higher education and healthcare.

Unfortunately Louisiana cannot now and has not been able to pay for these programs ever since the portraits of Jindal began to get comfortable on the mansion and capitol walls.

As a result of a current severe $1.6B budget deficit (which according to a number of legislators is a precursor of things to come the next three or four years),  Louisiana lawmakers, (mind you--republicans and democrats) are defying Louisiana governor Bobby Jindal, who selfishly knows only to be concerned about what will advance his national reputation, his agenda and his pathetic presidential fantasies.

Since the governor has not given the legislature a path out, a way to increase its economic incentives while maintaining education and healthcare, Louisiana is going to raise revenues whether Jindal likes it or not.

Call it taxes or rollback of tax credits or whatever you might want to call it.

The truth is clear and obvious.  Jindal and the legislators knew this day would be coming.  It is now here. It has come.

Republicans and democrats alike know that bringing in new business is grand but since the state cannot afford to educate or to provide healthcare to current and future employees,  the budget transactions are a farce.  In essence, we are essentially bribing industry to open up shop in Louisiana without our being able to service those very industries now and into the future.

Below is a video of the personal privilege by Republican Rep. Joel Robideaux, a Jindal hand-picked chairman of the House Ways and Means committee.  Watch it.  It is very instructive and powerful.

After his speech ended, Robideaux was asked by a House member if he was willing to attend a veto-session after an expected veto by the governor at the end of the session.  Jindal has repeatedly threatened he would veto the budget if revenue is raised without an equal amount of cuts.  According to Jindal, who is taking marching orders from his personal king-maker, Grover Norquist, raising revenues in this way would be tax increases.

Robideaux said he would attend a veto session.

The showdown is here.  The rest will be history…

Today, Chief Executive reported that CEOs nationwide rank Louisiana No. 7 in the U.S., the state’s highest position ever, in the magazine’s annual ranking of Best & Worst States for Business. The report continues the state’s ascent in national business climate rankings, with Louisiana showing the greatest improvement of any state in the U.S. over the past seven years. Since January 2008, Louisiana has improved a nation-best 40 spots in the Chief Executive survey.

Governor Bobby Jindal said, “Louisiana now stands as a formidable force in the global competition for jobs. In multiple national surveys, executives from around the country have recognized that Louisiana’s business climate is not only strong, but one of the best in the nation. This latest rating is a further confirmation that our efforts to make economic development our top priority have paid off. We have created a business environment where companies want to invest and create jobs for our citizens. As more business leaders look to our state for their next investment, we are assured that Louisiana’s future is bright.”

Chief Executive Editor-in-Chief J.P. Donlon said of Louisiana’s performance, “Louisiana is proof that a state can transform itself, provided it has the will and understanding of what attracts business investment, from a place that was once considered a backwater to a state that CEOs now regard as dynamic and business-friendly.”

In every major national business climate ranking, Louisiana stands higher today than it ever did before 2008, including rankings by Area Development, Beacon Hill Institute, Business Facilities, Chief Executive, CNBC, DCI, Forbes, Pollina Corporate Real Estate and Site Selection. Prior to 2008, Louisiana never ranked among the top 10 states in any national business climate ranking. Today, Louisiana ranks among the top 10 states in most of them.

Since January 2008, LED has secured economic development wins that are resulting in more than 91,000 new jobs and more than $62 billion in new capital investment in Louisiana. According to the U.S. Bureau of Labor Statistics (BLS), Louisiana’s private-sector employment growth since January 2008 ranks second best in the South and seventh best in the U.S.