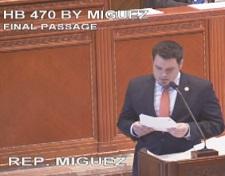 If Louisiana’s disease was a budget imbalance, it’s hard to see where the alleged cure of tax increases was not worse. Which may require another round of treatment that the authors of this previous round may find hazardous to their political health.

Last week, the state’s House of Representatives dug into the flesh of taxpayers of all kinds, with uncoordinated measures bordering on the irrational, in proposing tax hikes of $677 million – and left wishing they could have done more. A critical mass of the majority Republicans had to join almost all Democrats to pass these measures. At day’s end, chamber leaders declared they wished these proceeds to go entirely to fund higher education, essentially wiping out any reductions from this year’s baseline levels, perhaps as a ploy to pressure health care interests to lobby for additional increases to make up for a gap formed from a combination of not funding for next fiscal year previous improvements to charity hospital operations requested by their nongovernment managers, the opening of the new one of these in New Orleans, and to fund present and future pension payments for the previous state employees of the facilities prior to the state turning over management, of $200 million.

Few of the actions taken made any fiscal sense, these being passage of HB 218, which changes carrying periods for net operating losses by corporations that would reduce incentives to make decisions primarily for their tax implications; of HB 402, which increases taxation on income earned in other states, thereby encouraging making it in Louisiana; and of HB 549 (which actually is unlikely to contribute any additional revenues this year), which begins to reduce the horizontal drilling credit when oil reaches $70 a barrel, recognizing that at a certain point prices become high enough to need less in the way of incentive to perform expensive drilling. These aren’t perfect pieces of legislation in the larger scheme of balancing revenues and spending, but when considered in isolation at least they recognize that tax policy should steer behavior towards activities that increase economic output and therefore government tax take beyond the value of the break.

Others took ideas that could have worked along these lines and butchered them. Approval of HB 119, increasing cigarette taxes and dedicating these avails to expenses in Medicaid, where smoking-related illnesses get paid by the public, ended up subverting good budgeting principles by inclusion of a clause mandating that this spending could not displace other general fund spending on health care. HB 829 made it marginally more difficult to qualify expenses for the Motion Picture Investor Tax Credit and put a cap on it that still allows for massive wasteful spending. HB 779 allows for a longer bleeding period for the solar tax credit, instead of cauterizing it now. Passing HB 805, ending a quarter of the rebate portion for the local inventory tax levied, serves just as a bandage over the counterproductive tax that needs to be debrided in its entirety, forcing local governments to embark on their own (in most cases long-needed) examinations of the wisdom of their tax policies.

The rest adhered to an irrational principle of grabbing money, regardless of whether the inflicted tax exception was productive, wherever it could be located in a manner that extrapolated to recent riots in Baltimore would mean instead of locking up for a long time those who did the damage that authorities would jail for a week anybody seen on the streets regardless of whether they committed violent and/or destructive acts. HB 624, HB 629, and HB 635 all amputated parts of numerous tax breaks equally with seemingly no thought as to the inherent values of these, while HCR 8 would do so on a temporary basis concerning business utility taxes, under this notion that the pain should be spread around, including the innocent with the guilty.

This strategy largely of taking machetes to the jungle to hack indiscriminately your way to budget solvency defies best fiscal principles. Numerous studies over the years have identified which are and are not the productive tax exceptions in the state’s revenue code, and legislators knew for months in advance this was coming and had time to come up with coherent changes that served both to encourage economic growth and to increase tax revenues. But it takes political courage to raze the dangerous structures in the village, instead of protecting some of them and from the remainder of those and the sound ones knocking down some of their walls, and one of the last places to look for this quality is in Louisiana’s Legislature. That approach only perpetuates the problem that brought legislators to this point in the first place.

Which could lead to some significant political consequences if the guy many of these lawmakers and the chattering classes vilify, Gov. Bobby Jindal, does what he says he will do (assuming these went into law as currently written) – veto tax increases that do not have offsets elsewhere. Strictly speaking, that means he signs only HB 805. He should not be so rigid as to discount HB 218, which over time evens out, and he should see the wisdom in the cost-paying HB 119 (minus the offending funds-supplanting amendment), the activity-encouraging HB 402, and the proper incentivizing of HB 549. That wisdom also could extend to prodding by veto threat the reshaping HB 829 to make for a lower cap and sunset provision and for HB 779 to cause immediate sunset. The remainder are not worth keeping (HCR 8 he cannot veto but he can threaten line-item vetoing of equivalent spending in the budget as leverage to stop it).

And he can do it. The most noxious of these bills had the smallest majorities, assuming the unlikely event that all nonvoting members would have approved, all at or below veto-proof majorities. There’s always peeling off of support for veto overrides compared to the vote to pass them along to the governor, for it’s then that the chief executive can turn up the heat on a few wavering members. Of all that passed, not even half would survive a veto, even considering it’s a lame duck casting these. (This doesn’t even consider that, because some of these rollbacks did not have two-thirds majorities, those likely are unconstitutional.)

Of course, the Senate gets a crack at these, and already it has shown more sense by moving through passage of SB 48 and SB 155, the former decoupling Taylor Opportunity Program for Students awards from college tuition and the latter that would permit (if approved by the people) starting next year higher education systems to set tuition levels (although it had amended onto it a potential poison pill that would let systems set their own admission standards), grasps something that a House majority seems unable to: it’s not only a question of finding taxpayer revenues, but in the most efficient and fairest of ways; targeting by merit, not by blasting away indiscriminately at taxpayers and service users with a sweeping machine gun hand. This recognition that higher education needs to rely more on its own resources also acknowledges that it’s not just revenue choices that matter, but spending choices as well. Empowering more ably higher education to look after itself understands the reality of the presence of its systematic inefficiencies that market discipline can wring out to taxpayer and user benefits.

Representatives, especially some Republicans, had better hope the Senate rescues them from their insanity. A number of them walked into a clever trap set for them by Democrats’ leader and gubernatorial candidate state Rep. John Bel Edwards, who said Democrats, who normally enjoy taxing everything in sight as long as it has a Robin Hood quality to these, would vote against those kinds of measures unless enough Republicans joined in to pass those. By the looks of things, some choreographing went on where a sufficient number of Republicans not entirely believers in conservatism who think themselves safe for reelection (or who are term-limited even as all are linked to interest in other future offices) offered up enough votes acceding to that demand.

But this was a sucker’s move. Now Democrats running in those districts can claim legitimately that their tax-raising ideas merely replicate the Republican incumbents’, encouraging voters to choose them on the basis of differences on other issues, while GOP challengers who are genuinely anti-tax can present a choice, not an echo, relative to the incumbents. With both kinds of challengers siphoning votes, those incumbents who draw these of quality will be in trouble this fall. Successful Jindal vetoes and the panic of a likely special session then would seal the fate of these unreliable, alleged conservatives. The Senate finding them ways to reject half-baked tax increases on a set of final bills can throw them a lifeline saving them from both their own lack of political and policy acumens.

Whether this will happen is another matter, but the larger point stands that what has come out of the House contains too much irrationality, aided and abetted by too many who seem too willing to doff for convenience sake their smaller-government, taxpayer-friendly raiment, compared to more sensible alternatives. Hopefully wiser heads will prevail, certainly for the sake of the citizenry, but also, for those who care about their fates, for the political careers of those needlessly if not stupidly sending us down this path.