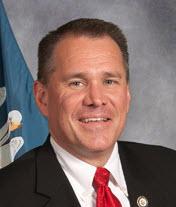 State Rep. Alan Seabaugh is playing with fire, according to some local politicos, as he fights for passage of a bill that would eliminate employee payroll deductions for union dues.    The bill is being pushed heavily by the Louisiana Association of Business and Industry (LABI) and Republicans, including Seabaugh, are carrying the water for the business lobby.  Seabaugh has a 98% voter approval rating with LABI.

He is also on the Labor and Industrial Relations Committee, which approved the bill on a 9-6 vote to send it to the House floor on Tuesday, May 12.  All Republicans voted for the bill; Democrats voted against.    Columnist Robert Mann recently published a video at NOLA.com which gives evidence that big business interests regard the legislation as an effort to choke the life out of  unions and other employee organizations.    The legislation has teachers, police officers, and firemen in an uproar, and some Republican legislators are feeling the heat and want the bill to just go away.    It is an agonizing decision for these legislators – do they want to face the wrath of LABI or the wrath of teachers, police officers, and firemen and their families and friends.    Sgt. Michael Carter, longtime president of the Shreveport Police Officers Association (SPOA) and a 19-year veteran of SPD, pulled no punches.    “We hold Rep. Seabaugh personally responsible for this bill and its malicious intent towards the working police officers in Shreveport,” Carter said.    He noted that SPOA should not be included in the bill.  He added, “Reps. Bishop and Seabaugh have attacked SPOA without reason and are intent on destroying an organization that serves local officers as they sacrifice their personal health and safety protecting citizens of Shreveport.”    Some government watchers say the bill has become the most lobbied and contentious issue of the session.  A lot of money is being spent by proponents and opponents of the legislation on media buys and mailouts.    A group of 10 GOP legislators are urging Rep. Stuart J. Bishop, the main sponsor of the bill, to return it to the calendar, thereby eliminating a House floor vote.  Two of them voted for the bill in committee.  Had they not, the bill would have failed on an 8-7 vote and never made it out of committee.    Editor’s Note: See a detailed report from the SPOA below