Is what-me-worry Jindal: Pinocchio or Houdini? 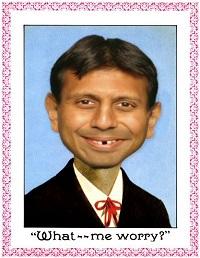 Louisiana Governor Bobby Jindal has often been lampooned in the media.  After the dreadful “State of the Union”- related speech to the nation, caricatures appeared all over—from Alfred E. Newman to Mr. Roberts.

However, based upon what is occurring today in Baton Rouge, one might need to ask if the man-destined-to-lead-the-free-world is going mad, or what?

Louisiana is in an historical budget crises.  It is so bad that conceivably, it could make the Democratic Party look good in this raw republican-red state.  Over the past few years, the GOP has controlled the legislature and for now eight years, Jindal has governed and has essentially gotten what he has wanted from the compliant.

As a result of using funny money and one-time financing, Louisiana was in the $1.2 hole before the oil price drops.  Now, it is $1.6B.

So, what is the conservative House of Representatives doing about this political and budgetary horror show taking place before a major statewide election year?

They are, as a public body, cutting deep.  They are also doing the T dance and it is not TANGO.  Sorry, it’s taxes.

Ultimately, the tax bill raise will be in the range of $500M to $900M, give or take a few pennies or so here and there.

The big debate right now is whether higher ed will drain the tax money away from healthcare since there is just so much money to go around.

Right now, the House has left healthcare out to dry.  Jindal’s entire healthcare privatization plan and University Medical Center in New Orleans could be severely undermined unless more cash is raised, more substantial cuts are made or a combination of both.

As we know, Republicans are averse to raising any tax whatsoever.  Yet, things are so miserable, the men and women of red might be donning the “Scarlet T” around their necks--as they face the voters, this fall .

“We commend the House on their hard work today,” Jindal said in a written statement Thursday. “This is one more step in the process towards passing a balanced budget that helps protect higher education and health care without raising taxes.”

On Friday, Jindal said in a press conference, “
“I think by the end of the process we can have a balanced budget that doesn’t raise taxes, that invests in higher education and health care. I think the important thing is that the process continues to move along,” the governor said. “It’s important not to view these bills in isolation.”

So, with now less than a month away from the end of this legislative session, unless revenues from existing taxes miraculously and dramatically increase once the Revenue Estimating Conference presents its final numbers, I have some burning questions:

How in the world is Louisiana going to constitutionally balance the budget while protecting higher education and healthcare and without raising taxes?

Or, assuming Jindal is now not so certain about the future--as might be indicated from his press conference--how in world is Louisiana going to constitutionally balance the budget “that invests” in higher education and healthcare, without raising taxes?

Not sure if there is a difference between “protecting” and “invests”, but I will let the Rhode Scholar explain sometime soon.

I am certain, however, that unless the governor can cut close to $1.6B dollars (yes, with a B) from the budget which absolutely results in annihilating higher ed and/or healthcare, it simply just cannot be done.  Not with less than a month left to go.  Not even in a special session unless it would be a constitutional special session, which will not be done, this year.

And, don’t you think the governor knows this?  And don’t you think the legislators know this too?  If our lawmakers know that the virtual impossible will not be done, why are they not putting Jindal on the proverbial carpet with such absurd or phony political rhetoric?

The bottom line inquiry as the clock ticks:  In my books, Jindal is engaging in wishful thinking or simply and downright lying?

Not even Alfred E. Newman could be this mad.  Face it guys, Jindal is Pinocchio or The Great Houdini.