Uncertainty prevails with Jindal and Louisiana legislators over budget 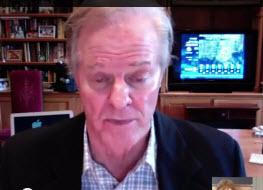 Louisiana's legislative session is half-completed.  There is much uncertainty in the air.  Will the legislators and Governor Jindal craft  a balanced budget for the upcoming fiscal year--as they are constitutionally mandated to do?  If the budget involves taxes that have been approved by the House and which are being discussed in the Senate, will the governor veto them and the budget?  Will there be an override session?

Early this week, Bernie Pinsonat of Southern Media and Opinion Research unveiled its spring poll which revealed the Louisiana public is willing to increases taxes to protect healthcare and education.  Governor Jindal has said healthcare and higher education would be protected, taxes would not be raised and the budget would be balanced--a feat that at this time seems to be impossible.

However, on Wednesday, Tyler Bridges wrote in the Advocate that legislative leaders and the governor's office are considering approving a budget that is good only until the next governor and next legislative body takes office in January.

Below is a rough overview of part one of the conversation.  Each segment is time-stamped.  You can watch the entire video or click on any of the hyper-linked time-stamps to watch those individual segments:

0:00 Opening introductions of Jim Brown and asking him about his "overall take" of the Louisiana legislative session

1:02 Brown: the legislators are in quicksand and are concerned about their reelections, finding the money to close the budget of the size is very difficult. The special interests and lobbyists are trying to protect their special interests and using election support as a carrot; they're trying somehow to get through this legislative session and the next governor and legislature will have an unbelievable mess on the hands; the new governor is going to have to call a legislative session very early when they take office; there has been no leadership by Jindal; the budget problem has been going on for years; it is so bad the state is now selling key properties on the capitol grounds; the next thing, (laughing) they are going to sell the capitol itself; Brown said "it's the lowest ebb in the state's history I have ever seen in terms of irresponsibility in Baton Rouge".

3:06 Opening introductions of Lawrence Chehardy and question asking his take on the legislative session

4:08 Chehardy: this budget problem has been known about is been going on for several years. Gov. Jindal is giving the legislature and insurmountable task in trying to balance a budget while not cutting deep into higher education and healthcare, again.  It looks like they are putting on a short-term patch to get through until the next governor and next legislature take power. It's one thing to attract business using tax incentives it's another thing to attract business by giving away money that you already have.  Likely that business taxes will increase but perhaps even personal taxes will also increase, in both direct and indirect ways; for example, the legislature may limit TOPS and force the students to pay more for their education. The cost of living and education is likely to go up. The news media should hold the candidates in the next election accountable asking them what are they going to do;. Specifics not platitudes;

7:00 Sabludowsky: politicians (such as those in the last Louisiana election) are always going to say they going to do something but don't. Last election the promises were to immediately repeal Obamacare. That has not been done.  Weeks ago the legislators were saying there will be no piecemeal budget but that's exactly what appears to be happening or at least according to the recent article by Tyler Bridges

7:55 Brown: not only is there a budget issue but there might be a legal issue. For example, LABI and treasurer John Kennedy are claiming that to raise the taxes it must be done by a two-thirds majority and number of the taxes that passed in the House did not have a two thirds.  This could be immersed in litigation after six or eight months. Then might claim victory before then (after this legislative session ending in June) but a judge might throw that victory out requiring the need of a special legislative session.  It is a real mess with a long way to go.

8:50 Chehardy: were not talking just about legislators or congresspeople.  We’re talking about the governor who has tremendous powers "and a governor who chooses to lead can get a lot done".  We need to find out what is candidates are going to do so they are on record.

9:40 Sabludowsky: they (legislators and the governor) are abdicating their responsibilities by only trying to do a piecemeal deal because they are are afraid of the governor, and his veto. You would likely have the same two-thirds vote legal issues under a new governor so why are the legislators giving up their responsibilities they have right now "to appease a governor who doesn't care about the Louisiana, only cares about himself-- why should we do that?  "

10:46 Brown: it is a self-serving thing, for example, most of the house legislators in Baton Rouge, republicans, voted for taxes; most of them are running for reelection;  "that's a two- edge sword, but they're hoping as Republicans they won't have Republican opposition" and they'll appeal to independent and Democratic voters saying I tried to solve the problem.  There is also tremendous pressure from LSU who are saying give me money.  The legislators are hoping that those pressuring them to get money from LSU will help reelect them." You've got all kind of conflicts going on here. I don't think they're genuflecting to Jindal". I think they think he's a gone pecan. They are doing this for self-survival

More in this category: « GOP Alario saving legislators for a more conservative day Bob Mann has message for democrats: Vote for a republican to defeat Vitter »
back to top