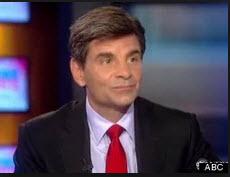 The liberal media has lost an expensive bet on another biased anchor. Just a few months after the suspension of NBC’s Brian Williams for lying on the air multiple times, ABC is now facing an embarrassment with their star anchor, George Stephanopolous.

ABC has placed Stephanopolous at the helm of both Good Morning America and This Week. His contract was renewed last year for as astounding $105 million. It is a seven year deal which would have kept him at ABC News until 2021.

At this point, there is obviously concern about not only the contract renewal but also the future of George Stephanopolous at ABC News. His credibility is totally destroyed after it was revealed last week he made a $75,000 donation to the Clinton Foundation. The donation was not initially disclosed by the anchor for good reason. It clearly shows his bias, which is why he has now apologized twice in the aftermath of the disclosure. To say the least, the mea culpas have been wholly inadequate.

It was already quite difficult to accept Stephanopolous as a real journalist due to his background as a Democratic Party operative. He spent years working for Democratic politicians like former Massachusetts Governor Michael Dukakis and former House Majority Leader Dick Gephardt. He was an early recruit for Bill Clinton, joining the campaign in 1991. Once Bill Clinton became President, Stephanopolous was a trusted Senior Advisor, working non-stop to squelch political fires and scandals for the President.

Upon leaving the Clinton White House, he was hired by ABC News. His career as a journalist has always been quite suspect due to his well-known political leanings. It has been no surprise to discover that in the last few years, he has made multiple appearances at Clinton Foundation events, as a panelist or moderator. In recent weeks, he conducted a combative interview with Peter Schweizer, author of the bombshell book, “Clinton Cash.” To many observers, it is obvious that Stephanopolous never stopped doing the dirty work for the Clinton political machine.

How can such a tainted person be taken seriously as news anchor? He could have a role as a liberal commentator or analyst, but not as a supposed neutral host.

This continues the long line of liberal anchors masquerading as objective journalists on the broadcast news networks. In the last few decades, almost all of the major network news anchors have been avowed liberals. From Dan Rather to Peter Jennings, it was never difficult to determine the ideology of the anchors. It is one of the reasons that so many viewers flocked to Fox News as it remains the only alternative for conservatives on the airwaves.

Despite the liberal track record of ABC and the other broadcast networks, there was at least the facade of objectivity in their reporting. The networks could claim that their anchors were not biased, but, in the case of Stephanopolous it is ridiculous to make such a claim. His history and recent activities with the Clinton Foundation make it impossible for viewers to trust his news reporting.

It is imperative for ABC News to immediately fire Stephanopolous and replace him with an anchor that at least has the semblance of objectivity. Otherwise, Republicans and conservatives should boycott their news programs. One GOP presidential candidate, U.S. Senator Rand Paul (R-KY), has already decided to forgo appearances with Stephanopolous because of the anchor’s lack of objectivity.

While Stephanopolous has already said he would not moderate a GOP presidential debate, RNC Chairman Reince Priebus claimed that the party was never going to consider Stephanopolous due to his Clinton ties. This stance has support among the public for a new Rasmussen poll shows that 46% of Americans want ABC to ban Stephanopolous from any presidential campaign coverage. Only 36% believe ABC should include Stephanopolous while the rest are undecided.

This story is another crisis for the mainstream news media, one entirely of their own making and due to both their liberal bias and their reluctance to embrace true objectivity. It is no surprise that so few Americans trust journalists today.