Bobby Jindal doesn't come cheap, but gets Irish up over same sex marriage 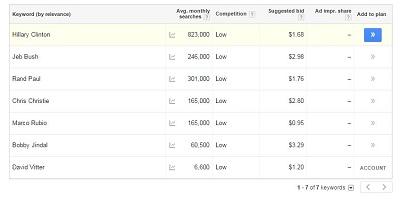 Bobby Jindal might not be the most popular politician in Louisiana, the most likely republican or democratic candidate to be elected president, but he is expensive.

Here is a Google keyword search we did today on a few select politicians to ascertain the number of searches done on them per month.

What this means is 823,000 average monthly searches were done on Hillary Clinton.  Rand Paul followed with 246,000.  David Vitter only received 6,600.  Bobby Jindal? Ten times that of David Vitter, at 60,500.  However, for those wanting to buy the key words for the respective politicians names, the highest suggested bid goes to Governor Jindal at $3.29.

Jindal gets the Irish up

If you think that the gay marriage Bobby Jindal controversy isn’t getting one’s Irish up, here is the latest report from Borowitz:

BATON ROUGE (The Borowitz Report) – In the aftermath of Irish voters legalizing gay marriage, Louisiana Governor Bobby Jindal has used his emergency powers to ban all Irish products from the state.

The sweeping trade sanctions will prevent popular Irish products, such as Jameson whiskey and Guinness Extra Stout, from being sold in Louisiana.

Jindal explained that breaking off trade with Ireland was necessary to protect the sanctity of marriage in Louisiana.

“Every time someone takes a sip of Guinness, a part of straight marriage dies,” he said.

(For those wondering, YES, this is satire!!)

@BobbyJindal yes like my gay partner who died in Iraq in 2006 in the Marines. Shame on u Jindal.

More in this category: « Jindal not a cajun crusader, must be joking, cher Tyler Bridges explains "convoluted" tax credit plan passed by Louisiana Senate »
back to top