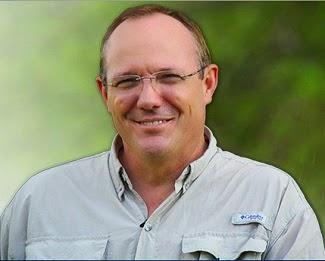 Mayor Mitch Landrieu will be giving his State of the City address tomorrow.  Perhaps one of the topics for discussion will be the decision of the city to eliminate traffic court compromises and settlements.

According to The Advocate:

A spokesman for Mayor Mitch Landrieu’s office confirmed the policy change, indicating that the days of dealing down traffic violations are a thing of the past, at least for now.

“In an effort to reduce the likelihood of repeat offenses, the city has implemented a new pilot policy that would require the penalties for all offenses in Traffic Court to be fully served,” mayoral spokesman Brad Howard said in an email message.

Howard said the new policy would remain in place for at least 30 days but did not say how much more money the city expects to reap from traffic violators.

Some believe the change of policy is to increase more revenues into the city’s coffers.

The policy change could increase the fees attorneys would make to handle these type of cases since attorneys might have to spend much more time on preparation for the defenses for their clients.

The Louisiana Democratic Party has taken to criticize Louisiana Representative Lenar Whitney, a former candidate for US congress.  Whitney has promoted herself as a fierce advocate for the Tea Party.

In a party email, the party accused Whitney of stump-speaking to the lunatic fringe:

Today Speaker Pro Tempore Walt Leger’s plan to increase the Earned Income Tax Credit for Louisiana’s working families was approved by the House Ways and Means Committee, over the bizarre and manufactured objections of Rep. Lenar Whitney. Whitney’s off-topic, unrelated questions served at once to underscore her disdain for doing the people’s business and her fundamental ignorance concerning immigration policy, tax policy, and the basic mechanics of governance.

While debating a bill that stands to benefit hardworking taxpayers and finally give a tax break to Louisiana families instead of out-of-state corporations, Whitney sought to derail the effort with a baseless appeal to fear and to ignorance. Putting politics ahead of people, as the state GOP is clearly determined to do this session, Whitney tried to turn a conversation about helping working families into an unrelated attack on President Obama--- looking to score cheap political points at the expense of working families. That the bill passed despite her fear-mongering and craven pandering is a testament to the common support across party lines for increasing the EITC.

“When Rep. Whitney derailed the hearing by asking about an unrelated executive order on immigration policy, that was irrelevant. But when she insisted she could somehow channel the true intent behind the words of President Reagan, she steered her arguments right off the map,” said Stephen Handwerk, executive director of the Louisiana Democratic Party. “There’s a place to hone your stump-speech to the paranoid fringes, but a hearing to bring some needed relief to working Louisiana families is not it.”

Senator Vitter, continues to lead his competition in the area of Internet promotions.   Vitter has taken to the web with creative tools like the one below which combines bumper-stickers with fundraising:

Team Vitter is rolling! We're excited about all of the progress our campaign has seen in the past few months. We have gotten endorsements from conservative leaders all over Louisiana and we have had grassroots supporters step up from across the state to add their endorsement. Recent polls show us solidly in the lead, and we have you to thank.

As election day quickly approaches, we will be counting on you to be involved. Today, we're launching a contest - we are asking Team Vitter to help us pick our newest bumper sticker design. Take a look and vote. (Link opens to page...See image below) 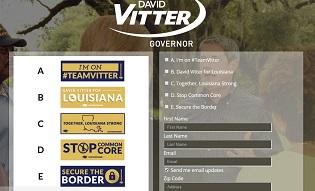 I’m very excited about the two upcoming GatorPAC Grassroots Leadership Boot Camps in Shreveport this Saturday, May 30thand another in Baton Rouge on Saturday, June 6th.

We’re expecting dozens of conservative leaders to attend these two events to learn the nuts and bolts of how to defeat big-spending entrenched politicians.

The Louisiana chapter of Americans for Prosperity, today in an email, promoted its  anti-tax policies and subtle reminders for those who might veer:

The Louisiana chapter of Americans for Prosperity told lawmakers this week that the group would oppose two bills that amount to aggressive tax increases on the people of Louisiana.

The organization told members of the House of Representatives that they would advocate against passage of HB 777 -- a proposed gas tax hike -- and HB 778 -- a sales tax increase. The group reasoned that both bills would increase taxes without fixing overspending.

In a letter to lawmakers, AFP-Louisiana State Director Phillip Joffrion said the following:

"If transportation funding in Louisiana needs to be increased, the legislature needs to spend time prioritizing the spending of dollars that they currently have, not looking to raise taxes. Substituting a tax hike for much needed structural change may be the easy way out, but it is not acceptable."

The group also said that if budget holes need to be plugged, lawmakers should look at eliminating wasteful handouts to Hollywood and solar companies.

The organization has been educating Louisianans on the policies being considered in Baton Rouge through a variety of channels, including paid and social media, phone banks, neighborhood canvassing and more. In turn, volunteers have been advocating for smaller, smarter government in Baton Rouge, by advocating for legislation like paycheck protection, and by opposing Medicaid expansion and tax increases.

A spokesman for the group said they planned to continue holding lawmakers accountable for their actions -- and thanking those who stood up for free markets -- well beyond the end of the legislative session.

More in this category: « Jindal jumps into ISIS debate, says Rand Paul unsuited as Commander-in-Chief Pinsonat: If no democrat in La. Governor runoff, turn out party lights »
back to top