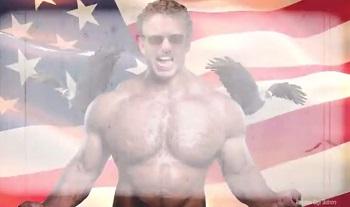 Rand Paul, who has been attacked by his republican opponents including Louisiana Governor Bobby Jindal lately is fighting, or at least, wrestling back.

At least, that’s what a video, in a take-off of WWE commercial, is projecting.

The ad has been produced by a pro-Paul Pac, America’s Liberty PAC.

It is explosive, as appararently is the issue of the role of American in foreign policy.

Also trying to take advantage of Rand Paul’s recent comments on MSNBC--that conservative hawks are responsible for ISIS, which set off  a resulting conservative firestorm, is of course, none other than Bobby Jindal.

As has been his mode operendi to respond to any issue that can get him exposure, Jindal, earlier this week sent out a an email statement claiming Paul was not fit to be the commander-in-chief.  According to some, the statement violated the Louisiana constitution, since it was created, using state resources and promoted verboten political content.

While he is not mentioned in the above-mentioned video, (Rand Paul and Lindsay Graham are wrestling targets), Jindal’s chief campaign promoter-in-chief, Timmy Teepell, is tag-teaming Paul trying to pin down the Kentucky Senator while taking in a few campaign sheckles in the process.

The Teepell email, which contained five links to a fundraising page, said:

Yesterday, a candidate for President of the United States blamed Republicans for the growth of ISIS and radical Islamic extremists in the Middle East.

You're probably thinking – there's no limit to how far Hillary Clinton and the liberal Democrats will go. And you're right about that.

But in this case, the candidate who blamed Republicans for creating a group of radical Islamic terrorists was… another Republican.

If you agree with Governor Jindal that the next President's job is to have the discipline and strength to wipe ISIS off the face of the earth, then stand with him today.

Maybe Rand Paul wants to be the favorite Republican among the "blame America first" crowd. I can't explain his illogical argument, and apparently neither can he. But I do know this: Governor Jindal was right when he said it is a perfect example of why Senator Paul is unsuited to be Commander-in-Chief.

Now Senator Paul has jumped out even to the left of President Obama and Hillary Clinton, taking the weakest, most liberal Democrat position possible.

If you've had enough, then stand up and say so.

If you're ready for a President who isn't afraid to call out evil in the world, then stand up and say so.

If you're ready for a President who will fight ISIS and radical Islamic terrorists, then stand up and say so.

President Reagan had a strategy for defeating communism: we win, they lose. He didn't blame Republicans or come up with theories about how it's really our fault for provoking an evil empire into existence.

If you're ready for a President who will show that kind of leadership again, then stand up and say so.

While Jindal wants as much exposure he can get associated with Rand Paul, it seems others do not want to give Paul exposure.

According to one site, Rare.com, Fox News is forgetting to show Paul among other candidates although he is polling positively and competitive compared to others.  Talk about Fair and Balanced!

More in this category: « Louisiana legislators on con game, Jindal can use shell game with budget Return of Hillary Clinton's Southern drawl "accentuates" her falsities »
back to top