Time for Louisiana legislature to man-up to Jindal's fantasies, bullying 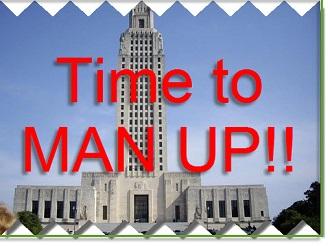 While the Louisiana Legislature, with only 11 days left to go, tries to grind out a budget compromise, Governor Bobby Jindal is in New Hampshire today. He is doing what he does best: The governor is using the state police as his own travel entourage (paid for at the public’s expense) campaigning for a position for which he hardly registers a heart-beat in most GOP polls.

Meantime, the Louisiana House and the Senate bend over backwards to fashion some type of compromise so the governor can save face nationally. Their goal is to construct a budget the Governor will not veto, thus staving off even more massive cuts in healthcare and/or education spending.

Due to Jindal’s and the legislature’s extraordinary neglect of budgetary affairs over the past eight years, the state is in the most dire of straights.

Here are a some select quotes:

Jindal and the Legislature also have cut taxes for higher-income taxpayers and approved numerous tax breaks for businesses. Economic growth has not improved tax collections enough to offset the lost tax revenue.

By law, the Legislature must approve a balanced budget every year. Jindal is threatening to veto the budget that lawmakers are drafting if the tax measures included in it do not have offsetting tax decreases.

Jindal and lawmakers have balanced the budget in name only in recent years by drawing down various reserve accounts, selling state property, tapping legal settlements and approving a tax amnesty program. The budget that legislators approved last year contained $1.2 billion in one-time money that would not be available this year.

That huge use of one-time money combined with the drop in oil taxes produced the $1.6 billion projected deficit that lawmakers have been grappling with this year. They have until June 11 to approve a budget for the fiscal year that begins on July 1.

The key to the entire effort is SB284, which would create what supporters call the SAVE fund but which faces strong resistance….
If the bill doesn’t pass, lawmakers say they will likely face a showdown with Jindal by proceeding to pass a budget that he would veto for raising taxes.

“If that bill goes down in flames, you almost don’t have any other choice but to vote for an override of the governor,” Leger said….

Senate President John Alario, R-Westwego and the governor’s most important ally in the Legislature, said in an interview Thursday that he doesn’t believe the House or Senate could muster the two-thirds vote needed to override Jindal.

The House and a Senate committee have approved $500 million or so in measures that would normally violate ATR’s anti-tax pledge — a pledge that Jindal signed in 2003 when he narrowly lost the governor’s race.

Jindal has promised to veto the budget that lawmakers are drafting if it contains those tax measures unless they approve an equivalent amount of tax decreases or offsets.

SB284 is critical to creating those offsets needed to get him to accept the budget.

In all, legislative leaders say passage of the measure could allow Jindal to accept $350 million of the $500 million or so that the other measures would raise.

But the bill is causing significant angst among legislators because it would essentially lead to a phantom fee per student and offsetting tax credit to create the $350 million on paper that Jindal could apply against the other revenue-raising measures. Another concern: It would create a tax credit for the tax-exempt higher education institutions.

Perhaps worse, according to Bridges and others, the budget problem does not get any better in future years and is expected to even worsen.

Over the past seven-plus weeks, the legislature has tried to cobble together a budget bill that would meet Jindal’s fantasy-land Grover Norquist demands—match any revenue increases with budget cuts and/or offsets.

“It’s already clear that the budget will be balanced with one-year fixes for ongoing expenses — at least $524 million of them, according to a May 25 report from the Legislative Fiscal Office. Also, Bridges notes that the “House has closed part of the deficit for next year and future years by approving measures that would generate $615 million in new revenue. That money would come from a 32-cent increase in the cigarette tax, a rollback in business tax breaks and a trimming of tax subsidies for the film and solar energy industries.”

Even with the revenue increases and budget cuts so far, the state remains hundreds of millions in the short, The House has attempted to funnel most of the revenue increases to higher education. The result, unfortunately, healthcare remains limp on the surgery-bed in immediate need of cash-blood infusions. Without an immediate and massive distribution of funding, public health facilities will be shuttered, the LSU medical center in Shreveport will be utterly ill-funded and the brand-new University Medical Center getting ready to open will do so but without vital services. As a result, the private- partner in Jindal’s public-private partnership plan for the New Orleans university hospital are rethinking the wisdom of remaining in that deal. Unquestionably, given the current and future expected shortfalls, attracting quality healthcare providers to a system and attracting medical students to a school, that are so woefully financially-hobbled, reigning in such uncertainties--will be major obstacles going forward.

Yet, instead of now trying to fix the problem, Jindal campaigns obsessively and sends out emails using the state's resources forever denouncing Obama, Clinton and Rand Paul and frantically making statements to gain an audience, any audience.  Meantime, the legislature with two more Jindal-promoted schemes that are using “duct tape” as Treasury John Kennedy is quoted to say. The plans are not only convoluted and confusing, they are laughable. Even worse, one of the plans is a budgetary fraud upon the students and the public.

The latter is the “SAVE fund” plan. It creates bogus fees imposed upon college students who are not required to pay the fee. The fee triggers a tax credit to the students. The student (or parents) assign to the state’s higher education system.

The fee-credit arrangement would bring in roughly $350 million. However, there’s a rub. As Bridges points out, “Another concern: It would create a tax credit for the tax-exempt higher education institutions.”

Apparently, as a result of that concern, the House Ways and Means committee has suddenly postponed today’s review of the “ Save” plan. The postponement will enable the Senate Finance Committee can to wrestle with these new issues, as the session clock races to a June 11 close.

Aside from the SAVE possibly harming the universities in the long-run, it is teaching college students an important life lesson they can save as they enter the world of adulthood. In essence, the state wants them to pretend they are being charged with a fee and in turn, get a tax credit which they assign back to the state. So much for intellectual honesty for the next generation. Sadly, we are teaching our most important resources--“don’t worry about how the game is played, beating the system is what counts”.

Unfortunately, these desperate acts of smokes, mirrors, rolls of duct-tapes, one-time fund swipes and lies are simply to appease Jindal so he does not veto the budget. Indeed, a vetoed budget would put Louisiana in a downward spiral resulting in very-probable credit downgrades, closures and chaos. Yet, Jindal would be able to maintain his no-tax virginity he has been preserving for his overseer, Grover Norquist, whom Jindal courts.

So, in short, Louisiana legislators are faced with these choices:

They can engage in these continued fiscal shell-games so that Jindal does not veto the budget. In doing this, they know full well that the constitutionally-mandated balanced budget will bust sometime in late 2015 or early 2016—a problem for the next administration and legislature. This kowtowing to the Louisiana governor would allow him to continue his pretense to the national ignorant that he has balanced a budget every year of his administration. In truth, this year’s budget would be balanced for a few months only. Perhaps worse, one could seriously argue this gimmick is unconstitutional. The state’s constitution mandates a balanced budget for the fiscal year, not for a few months. Intentionally wrapping a temporary budget Band-Aid around a bleeding budget knowing that others will be charged to create a long-term fix is bad precedent, horrible business practice and defies the very logic of the law requiring an annual budget.

Jindal could approve the budget with revenue increases (taxes) and without the gimmicks, (but with half-a million dollars in one-time money that won’t be available the following budget year). This might be political suicide for him because it would be violating his long-time loyalty to the Washington DC lobbyist Norquist.

Jindal could do nothing and let the budget be passed, thus, creating the additional fantasy that he had no part in the tax increases “the legislature imposed upon the people” in their trying to fix the budgetary disasters the governor and they made.

Last, the legislature could man-up. They could put Jindal on notice that they will take him on this summer and make his own life miserable. They can stay in a veto-override session for however long is necessary vowing to remove the states’ allegiance to false-gods and gimmicks. They could do the very jobs of which they are being paid. Indeed, this would mean more taxes and more cuts or more of one or the other. Yes, this would mean a veto override requiring a 2/3 majority vote. Of course, a veto session could delay his plans to announce his presidential candidacy. Unquestionably, it would show their willingness to take personal political risks now rather than later. It would send the rightful message to the governor—we must face this horrible budgetary Armageddon together, we caused it and it is time that we admit the truth and fix it.

Louisiana and the legislature can make a decision. We can pay now or we surely will pay later. The latter will only cause much more hardships for future administrations and legislators and citizens of this state.

It is time the people of Louisiana put their legislators on notice—zero tolerance. No more tolerance for gimmicks and tax loopholes. No approving a budget certain to bust only months after the signatures are dry. Either do the job now or get out of the way and make room for a brave new class of lawmakers who will do the people’s business instead of doing the business on the people they are sworn to serve.

More in this category: « Will "fixing a flat tire" be Pippa Middleton's new blockbuster bestseller? Increased Fees inconsistent vehicles for Louisiana legislators »
back to top