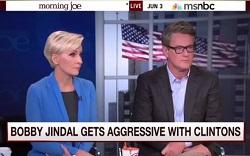 Mika and Joe Scarborough jabbed it out this morning over a comment Louisiana Governor Bobby Jindal made on Tuesday referencing the Monica Lewinsky scandal.

Jindal, in speaking in Florida, said that Bill Clinton’s biggest lie was not about Monica Lewinsky but about when he said that the “era of big government is over”.

Jindal is announcing later in June whether he will run for President, although, my believe he has made up his mind and will do so despite his low Louisiana poll numbers and his poor showing so far in GOP polls.  Bill Clinton's wife, Hillary, is also running for President of the United States.

Mika, thought the comment was “a little cutting”.   Joe, responded that since she started wearing braces, she appears agitated.

Ultimately, the two hosts appeared to agree the comment was “jabby”