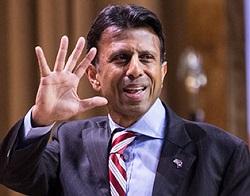 The Louisiana House Ways and Means Committee appears to have struck a significant blow to the Louisiana budget and to Governor Bobby Jindal's attempt to avoid tax increases today when it voted down SB284 which would set up an account mechanism in which Louisiana university students  would be charged a fee, triggering a tax credit that would help fund higher education and would help Louisiana balance its budget.

Jindal wanted to create a paper credit that would offset tax increases the legislature has been making to fill the $1.6B budget deficit.

The legislation by Senator Donahue was involuntarily withdrawn, a further assault upon the  bill,

The point of the Act was to create a mechanism of tax neutrality so Governor Jindal could say he has not raised taxes during his administration.

The legislation invokes the greater possibility of a Jindal veto of the budget and a legislative override--at the same time that Governor Jindal likely declares he is running for the office of President of the United States.

The legislators tried to amend the bill numerous times to reduce the duration of the legislation and to create other possible protections but ultimately, it failed to obtain a possible report from the committee and was voted 10-9 to be voluntarily withdrawn.

Are we hearing the Louisiana legislators mumble these words?