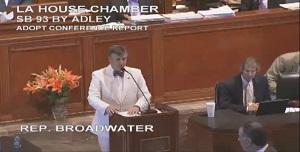 Governor Jindal: Don’t tell us we balanced budget by not raising taxes

The Louisiana legislative session from hell is over.  Here are some quick observations:

Despite what Louisiana Governor Bobby Jindal claims that we have a balanced budget without raising taxes while preserving healthcare and higher education, all of us know this is a fraud.   The SAFE act did absolutely zero but to give Jindal cover in favor of a deluded Washington lobbyist.  We raised taxes to balance this budget and the revenue neutral device was a scam to please a man who thinks himself, regardless who it might hurt.

If little Bobby Jindal wants to have his game so he can play with the big boys in Iowa and New Hampshire and claim he did not raise taxes because King Grover Norquist permits him to say it, let him play away.

If the Senate had put up the same effort that the House did-- to warn Jindal he would pay the price for his veto threat, it would have been light-years more difficult for the governor to veto the budget or any part of it.

We raised taxes more taxes on businesses than has ever been done in one year in my memory (which goes back quite a long time).

We created a false tax credit.  We have no idea whether the university students will be forced to pay anything in the future because the SAVE statute imposes an undefined assessment while the hearing and Revenue Secretary Tim Barfield kept called the same, a fee.

We don’t know if the IRS will come down on the Universities for taking a tax credit when it has no tax obligation.

We ignored the structural issues this state suffers from and will continue to endure for the sole purpose of helping Jindal pretend.

The House of Representatives process was a scam.  On the very last day of the session in dealing with the crises of our lifetime, we spent a full hour, or more, allowing two legislators say goodbye knowing we would limit debate on the issue of the year, the SAFE bill and the budget.

The SAFE bill opponents, after the bill passed in the late afternoon, then responded with a delay game-- trying to filibuster so the budget would not be passed.

The House of Representatives voted on spending bills and tax increases without knowing what was in the conference reports.  They did not read them.  They abdicated their responsibilities to the voters.  While they should be praised for their sacrifices this spring and their hard work, they failed us at the end.

Our education leaders preferred to accept a false accounting gimmick to raise revenues—one which was so ludicrous that if any of their students did the same with their own college loans, they would be kicked out of school.  If a university business instructor taught this type of practice, they would be fired for chicanery.

We have opened the door for the healthcare community to want their own bailout and dedicated funds just like the higher education guys got.  Are we going to turn hospitals and clinics down when they devise their own bogus tax credit?

Now that the session is over and Jindal will announce his ridiculous campaign for president, it will be interesting to see which of his commissioners, board members, and other contributors will be insane enough to support him for President of the United States.

And last: The only good thing that happened yesterday is that Governor Bobby Jindal will now be away from Louisiana, on the road until his own sine die which can not come soon enough.

Which simply proves there is always a silver lining under those dark blackened clouds.