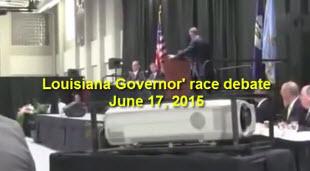 As political debates go, the Louisiana gubernatorial variety, held at the Alario Center today, was markedly tame--even on issues of great emotionality such as the Louisiana budget, the SAVE Act, same sex marriage, creation science. Affordable Exchange Act and more issues.

Missing from the West Bank debate was Louisiana US Senator David Vitter, who leads in the polls.  The Republican lawmaker could not make the debate due to a vote in Washington DC.  However, he did create a seven minute film that was played to the audience at the end of the program.

Clancy Dubos, of The Gambit, moderated the debate.

While the candidates present agreed on a variety of issues, there was some disagreement during the opening “lightening round”, which Dubos said most debates do at the their end.{snippet 244}

Candidates were told to only give yes or no answers but would have an opportunity to explain further during the course of the morning’s program.

On some of the major controversial issues presented this legislative session, here were the tallies:

Only Scott Angelle approved the teaching of some form of creation science in public schools.

All three candidates approved the teaching of some form of sex education.

According to the candidates, they would submit a budget that fully funds early education laws, currently on the books, but not fully funded.

All candidates believe the oil and gas activity contributed to coastal land loss.

Only Angelle supports the passing of the Marriage and Conscience Act, one of Louisiana Governor Bobby Jindal’s main legislative planks this session.   All three would accept as the final word,  a US Supreme Court ruling on same sex marriage, should the Court legalize it, later this month.

All three said they would set up state exchanges should the US Court rule against the subsidies for the federal exchanges.  Angelle disclaimed, saying, he would do so until Congress were to act

Only Angelle would reduce state contracting by at least ten percent, an idea proposed by Louisiana Treasurer John Kennedy.