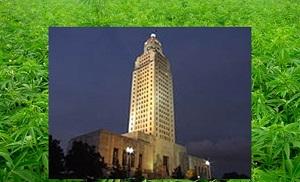 Who would have thought that the most notable legislation in the recently completed session of the Louisiana legislature was increasing taxes by over one billion dollars, and legalizing marijuana use for certain purposes.  Some observers around the state capitol wondered sarcastically just where did all the conservative republicans go?

Cannabis, the technical name for the marijuana plant, is now legal for medical use under directives yet to be developed. But the devil is in the details.  Three different state boards have to develop rules and regulations for dispensation.  Who can receive marijuana for medical purposes?  Is simply a doctor’s prescription all that is needed?  Use is supposed to be limited to a few categories.  But who is going to regulate and monitor what prescriptions are written?


Then who is actually going to cultivate the marijuana?  The LSU School of Agriculture has the right of first refusal to grow the weed.  But if they opt out, who gets a license to raise and farm the plant?  If you thought there was political influence in giving out riverboat licenses, imagine the wheeling and dealing that will take place over licenses to grow pot.


All this regulatory bureaucracy is the easy stuff.  What really will concern businesses are the legal ramifications.  Can employees use medical marijuana in the workplace?  What if such use impacts a worker’s ability to function in the job.  Can the supervisor fire the employee?  Can the employee be demoted for not be able to perform some of the required tasks?  What business would want their worker to drive or operate machinery while smoking marijuana?


How about a company that has contracts with the federal government?  Although the federal laws prohibiting marijuana use are not enforced, actual consumption is still illegal under federal statutes.  Would such an employee using the drug still be eligible for worker’s compensation because of such federal prohibitions?


What about the legal exposure to the doctor who prescribes the drug or the dispensaries that provide it, should the user gets into an accident or injures someone else?  Are such suppliers liable for damages?  Many states hold bars and restaurants liable for drunk drivers who cause damage or injury.  How about pot providers?  Will they be at risk to be sued?


Then of course there is always the bugaboo of dealing with insurance.  Liability insurance is a necessary evil for anyone related to the dispensing of marijuana.  How broad and how expensive will insurances policies be?  What does a business insure for?  How about theft by an employee?  To say that there are numerous unanswered questions would be an understatement.

Just this week, the Colorado Supreme Court ruled that an employee can be fired by a business for using medical marijuana even when the employee is away from work and off-duty.  The court’s logic was based on the fact that marijuana is still illegal under federal law, continues to be listed as a Schedule 1 highly dangerous drug, and is included on the list of heroin and LSD.

In the Colorado case, the fired employee was a quadriplegic who has used a wheelchair for many years.  In random drug testing of employees, he tested positive for THC, which is the active mind-altering component in marijuana.  The company’s drug policy allowed him to be fired even though the drug in his system was not consumed at work.

Now remember it is legal to obtain marijuana in Colorado for recreational purposed.  Yet the Supreme Court there took a strong stance in favor of allowing a business to set up its own rules.  In the court’s words, employers are not required  ”to accommodate the medical use of marijuana in any work place.”

So although the use of marijuana for medical purposes is now legal in Louisiana, there will be long delays in setting up policies and procedures, and many unanswered questions that will make this whole new law a field day for the lawyers.  Get ready for lots of litigation.

“When I was in England, I experimented with marijuana a time or two, and I didn’t like it. I didn’t inhale and never tried it again.” – Bill Clinton