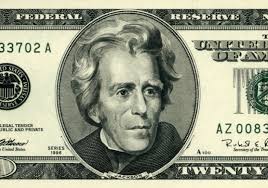 There is a major push by the bureaucrats in Washington to put the first woman on the face of paper currency.  There are a number of choices, and you will get no argument from me that there certainly is a place on one of our bills for a woman.  But one of the options is to take Andrew Jackson off the twenty-dollar bill, and that ought to be fightin’ words down here in Louisiana.

For a number of years, social reformer Susan B. Anthony adorned the dollar coin, but she was replaced by congress in 1997 with Sacagawea, an Indian guide of the Lewis and Clark expedition.  There certainly are a number of praiseworthy women who well deserve to grace paper money.  The list of proposed female names is long including Susan Anthony redux, Eleanor Roosevelt who redefined the role of First Lady, Rosa Parks, the first lady of civil rights, Rachel Carson, who spurred the modern American environmental movement, Elizabeth Cady Stanton,called the “founding genius” of the women's rights movement, the Bayou State’s own first Lady Lindy Boggs, a nine term congresswoman and U.S. Ambassador to the Vatican; the list goes on and on.

Now I’m personally a big supporter of equal rights and equal pay for women.  Heck, I introduced the first legislation to adopt the equal rights amendment to the constitution back in the early 1970s when I served as a Louisiana State Senator.  So I’m all for a women on our paper money.  But please don’t mess with Andrew Jackson.  The seventh president of the United States was as important to Louisiana as any political leader in the state’s history.

Jackson was the son of Scottish colonists (like me), and was the only president to fight in two wars, the Revolutionary War and the War of 1812.  He was a Tennessee Senator and Judge, before becoming a national hero leading the American victory at the battle of New Orleans in the winter of 1814.  The British waged an all out attack n the Crescent City in an effort to gain controlling sea access to the Mississippi River.  Control of the river meant control of commerce, and ultimate victory, as the South found out during the Civil War.

Jackson knew his troops were greatly outnumbered by the British forces, but he masterminded a defense of New Orleans as well as an attack plan against the Brits.  He gathered local engineers to find out the best way to seal off the city, by clogging the various waterways throughout the swamps surrounding New Orleans.   Then he gathered a rag tag army of volunteer militia, free blacks, Indians, Creoles, and of course the famous inclusion of a band of pirates led by Jean Lafitte.

Although greatly outnumbered, Jackson’s forces won a huge victory that sealed his reputation as an American hero, and the savior of New Orleans.  Fourteen years later, he moved into the White House.  If you want to see Hollywood’s entertaining version of the Battle of New Orleans with great character reproductions of Jackson by Charlton Heston, and Jean Lafitte by Yul Brynner, check out the movie “The Buccaneer.”  There is also a new movie, called "Andrew Jackson and the Battle for New Orleans” that is being shot in New Orleans now for release next year.

Andrew Jackson loved Louisiana and was greatly disheartened that he was not appointed Governor of the state in 1805. President Thomas Jefferson passed over Jackson, and chose General James Wilkerson instead to be Louisiana’s chief executive. Wilkerson resigned in disgrace a few years later, and President Jefferson regretted not appointing the future president. Jackson was married on the banks of the Mississippi River right across form my old home in Concordia Parish. So his ties to Louisiana were quite strong.

One of the knocks on Jackson by current critics is that he was a slaveholder.  Well, so were Washington (one dollar bill), Jefferson (two dollar bill), Grant (Fifty Dollar bill), and Madison (five thousand dollar bill).

History validates that Andrew Jackson was a tough but fair commander and president.  It also confirms that the president known as “Old Hickory” was a major force in the development and protection of New Orleans and the entire Bayou State.  He well deserves to stay on the twenty-dollar bill.

You must pay the price if you wish to secure the blessing.