Could Jindal abolish the US Supreme Court? 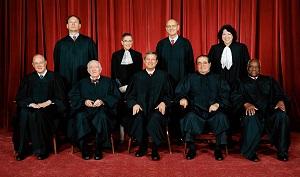 Perhaps echoing sentiments he has harbored from his youthful enthusiasm for former Pres. Ronald Reagan, Gov. Bobby Jindal has transferred a desire to abolish the federal Department of Education to getting rid of the U.S. Supreme Court. Actually, he doesn’t have to go that far to rein in a court straying from the Constitution on issues of the day, and if he does win the presidency, with help from his party he would be in excellent position to do so.

Jindal expressed this desire after two monumentally flawed, discouraging, and dangerous decisions, one to ignore the strict wording of a law in favor of an interpretation the opposite of it infused into it by the Court, and the other to conjure up a new protected class of individuals on the basis of their behavior not otherwise explicitly listed in the Constitution. Both set bad precedents that empowered government while simultaneously threatening liberty through dispensing with democratic norms.

But while Jindal’s frustration may be understandable, the Constitution does not really provide for that solution, unless he wishes to go through the difficult amendment process. Theoretically, this complete neutering of the Court could happen statutorily by the powers vested in Congress in Art. III that, while the article requires the presence of one Supreme Court, it could set the Court’s membership currently at nine to zero. However, it need not take such a drastic approach, for Art. III also allows Congress to set the appellate jurisdiction of the Court beyond that specified in the Constitution – and once before it has done that as a reaction to a Court taking up an inflammatory case.

In 1867, disturbed by the attempt by a newspaper publisher in unreconstructed, military-occupied Mississippi to invoke habeas corpus under one law permitting Court reviews of these requests after his having been jailed under another law for writing pieces unkind to Reconstruction, Congress simply suspended the law that had given that appellate jurisdiction to the Court. It then ruled in 1869 the action against itself constitutional, establishing that Congress could remove jurisdiction over certain kinds of cases from the Court.

This means that if, for example, if Jindal wished that the Court not deal with the Patient Protection and Affordable Care Act, Congress could pass a law stripping the Court of the ability to hear cases about this on appeal. This could lead to confusing situations – as a result, whatever the various circuit courts of appeals ruled in each of their 12 circuits would hold for that circuit on issues stemming from this law – but would accomplish the purpose.

Naturally, at this time it is likely that Democrats in the Senate might filibuster to prevent passage of such a law, but that could be dispensed with through the “nuclear option,” or that a simple majority of the chamber comprised of all Republicans could vote to exempt filibusters on that subject. Yet even if it passed this hurdle, Pres. Barack Obama probably would veto such a bill and Republicans lack the two-thirds majorities to overcome that.

However, the 2016 elections might solve these problems for the GOP; certainly Jindal wants to be part of this solution by occupying the White House. Still, even if such a law came to fruition, it would not apply retroactively; only Constitutional amendments mandating how the judiciary must decide on these issues could build a fool-proof avenue by which to litigate again the questions previously taken up, and poorly decided, by the Court from last week where these would be guaranteed to turn out differently.

So Jindal’s thinking on this isn’t so far out when put into a different format. But whether Republicans even can construct majorities among themselves to alter Court jurisdictions – something that appears could not happen for at least 19 months – much less incorporating Democrats into attaining the supermajorities and most states’ approvals required for Constitutional amending that would undo the damage already done, seems far-fetched. However, righting wrongs never is easy.