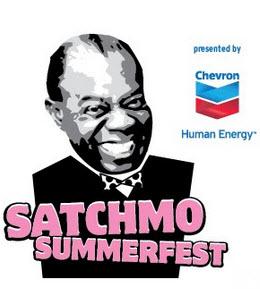 Over 40 Musical Performances
Two stages will feature over 40 contemporary and traditional jazz musicians and brass bands. Friday, July 31st, Deacon John makes his Satchmo SummerFest debut. With a career spanning more than 50 years, vocalist, songwriter, and bandleader Deacon John Moore was part of the early rhythm and blues scene that later gave birth to rock 'n roll. In the late 1950s, he was a member of the legendary Dew Drop Inn's house band and has played with renowned artists like Allen Toussaint, Ernie K. Doe, Aaron Neville, and Lee Dorsey. Deacon John was inducted into the Louisiana Music Hall of Fame in 2000.

Jewel Brown returns to Satchmo SummerFest for the first time since 2005. In the 1960's, the vocalist was offered positions with Duke Ellington and Louis Armstrong and "immediately" chose Armstrong. The two worked together for seven prolific years that included international tours and films. In addition to her Saturday, August 1st performance with the Ella and Louis Tribute Band, Ms. Brown will be interviewed by Fred Kasten at the Old U.S. Mint on Sunday, August 2nd at 2:30pm.

Grammy-winning Rebirth Brass Band makes a rare Satchmo SummerFest appearance by closing out the Red Beans & Ricely Yours Stage on Friday, July 31st. Since 1983, Rebirth has upheld the New Orleans brass band tradition while infusing it with funk and hip-hop to create a signature sound. Festival organizers are thrilled to welcome them back to the event after a five-year hiatus due to the band's international touring schedule.

Yoshio Toyama, the "Satchmo of Japan," will celebrate his love of New Orleans and Armstrong during his Festival performance on Saturday, August 1st. Kermit Ruffins, in keeping with tradition, will close out the festival by leading a Trumpet Tribute to Louis on Sunday, August 2nd. Other festival favorites include James Andrews, Jeremy Davenport, Donald Harrison, Meschiya Lake and the Little Big Horns, Charmaine Neville, Paulin Brothers, and many more.

More in this category: « Jindal, Caldwell right to not speed into gay marriages NBC, Univision political correctness Trumps straight talk »
back to top