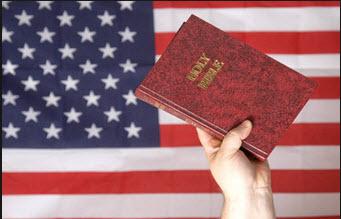 Today, in a statement, Jindal said:

“This Executive Order protects religious liberty.  The ACLU used to defend civil liberties, now it appears they attack them.  The Left likes to pick and choose which liberties they support at any given time, and it seems to me that religious liberty has fallen out of favor with them.

“Well, I’m not going to be swayed by the latest opinion poll or left wing lawsuit.  Religious liberty is fundamental to our freedom as Americans and I will not back down from defending it.”

The ACLU, earlier, in a statement said:

“Governor Jindal has violated the Louisiana Constitution by setting up special protections for those who share his belief system,” ACLU of Louisiana’s Executive Director Marjorie Esman said in a statement. “In our country no one is above the law, including the Governor. He swore to uphold the laws of Louisiana. This lawsuit seeks to hold him to that oath.”

On Monday, the governor’s office issued a memorandum concerning the religious liberty issue.   The following is a legalmemorandum, from Thomas Enright, Executive Counsel to Governor Jindal:

WhileObergefell will significantly impact Louisiana’s same-sex marriage cases, currently consolidated at the U.S. Court of Appeals for the Fifth Circuit asRobicheaux v. Caldwell, No.14-31037, the Fifth Circuit has not yet rendered a full and appropriate decision in these matters.  Today, the Fifth Circuit ordered the two sides to file on or beforeJuly 1, 2015, a letter advisory on the current posture of the litigation.

When the Fifth Circuit issues their judgment, it is important to note it will in no way diminish or overrule the fundamental rights to the free exercise of religion and freedom of speech guaranteed by both the First Amendment to the United States Constitution and Article 1, Section 8 of the Louisiana Constitution. In its ruling, the Supreme Court majority  affirmed “[t]he First Amendment ensures that religious organizations and persons are given proper protection as they seek to teach the principles that are so fulfilling and so central to their lives and faiths, and to their own deep aspirations to continue the family structure they have long revered.”

In Louisiana, we celebrate diversity of belief and the religious liberties that are fundamental to our society. We do not support discrimination and believe that these two foundational values can simultaneously co-exist. The ruling in Obergefell does not permit states to bar same-sex couples from marriage, but the ruling in no way forces specific individuals to violate their sincerely held religious beliefs, or to perform or facilitate same sex marriages.

This religious liberty protection is reiterated in our statutes by the “Preservation of Religious Freedom Act” (La. R.S. 13:5231, et seq.), which clarifies that:

Government shall not substantially burden a person's exercise of religion; even if the burden results from a facially neutral rule or a rule of general applicability, unless it demonstrates that application of the burden to the person is both:
(1)  In furtherance of a compelling governmental interest.
(2) The least restrictive means of furthering that compelling governmental interest.

In addition, on May 19, 2015, Governor Jindal issued Executive Order No. BJ 2015-8, which notes, in relevant part, “it is of preeminent importance that government take no adverse action against a person, wholly or partially, on the basis that such person acts in accordance with his religious belief that marriage is or should be recognized as the union of one man and one woman.”

The protections referenced above extend to individuals employed in any branch of the government of the state. Accordingly, we urge all branches of government in Louisiana to protect and respect individuals’ fundamental religious liberties regarding sincerely held religious convictions about the institution of marriage. By way of example, appropriate accommodations may be made for state employees who express a religious objection to involvement in issuance of same-sex marriage licenses, and judges and justices of the peace may not be forced to officiate a same-sex wedding ceremony when other authorized individuals who have no religious objection are available.  The facts of any such case may affect the strength of the individual’s accommodation claims.

If any such state employee or official who asserts a religious objection is faced with a legal challenge for doing so, numerous attorneys have committed to defend their rights free of charge, subject to the facts of each case.

As the full implications ofFriday’sSupreme Court decision are determined over the coming months and years, Louisiana is resolved to protect the inalienable rights of all it citizens.