Not all media stories about Bobby Jindal are negative 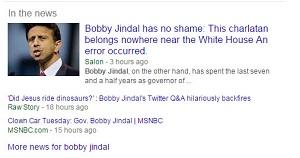 Governor Bobby Jindal has received his share of criticism since first declaring his campaign for US President.  His Youtube family video where he and his wife Supriya told their kids of  their decision for him to run for president came off in the media like a tree-falling-thud.   His twitter #askbobby also backfired with the twittersphere taunting him on a host of issues.

However, not all media has been negative recently.  Some have actually tried to show him in a more fair light.

Here are some of those comments we found on the Internet today, although, admittedly, searching for favorable stories on google has been quite difficult:

Appearing alongside his wife Jessica onFOX411's morning show, Jep Robertson said that Jindal, whose approval rating in March was a nation-low 27 percent, is a "very good man" that they both support.

"I definitely would vote for him. He's a very, very good man," Jep Robertson said. "We've gotten to chat with him several times, kind of just talking, he's a great dude ... he's very transparent, has a great family, so yeah I'd definitely give him my vote."

Republican presidential candidate Bobby Jindal, the first Indian-American governor in the U.S., on Tuesdayadvertiseda campaign T-shirt that has the words “Tanned. Rested. Ready” printed on the front. In case the innuendo wasn’t clear, Jindal tweeted: “The liberal media said, ‘There’s not much Indian left in Bobby Jindal,’ so we made shirts to mock them.”

The shirt was the latest volley in a long week of debate over how to talk about Jindal’s ties, or lack of ties, to his Indian heritage. During his campaign announcement speech on Wednesday, Jindal joked that he was “tanned, rested, and ready,” but only mentioned the word “Indian” once, when he talked about what America is not.

“I’m done with all this talk about hyphenated Americans,” Jindal said. “We are not Indian-Americans, Irish-Americans, African-Americans, rich Americans, or poor Americans. We are all Americans.” It was nothing new from someone who called for “the end of race” in a 2013 Politicoop-ed.

Jindal, who is courting evangelical voters in his campaign for the GOP presidential nomination, framed the executive order as a protection of “religious liberty” for Christians who oppose same-sex marriage and called the lawsuit an “attack” on civil liberties.

The “Marriage and Conscience” order prohibits state agencies under Jindal’s control from denying licenses, benefits, contracts or tax deductions in response to actions taken because of someone’s “religious belief that marriage is or should be recognized as the union of one man and one woman.”

The Republican governor issued the order after lawmakers refused to write similar provisions into Louisiana law.