47% Romney attracts critical conservative base more than Mitt on stump 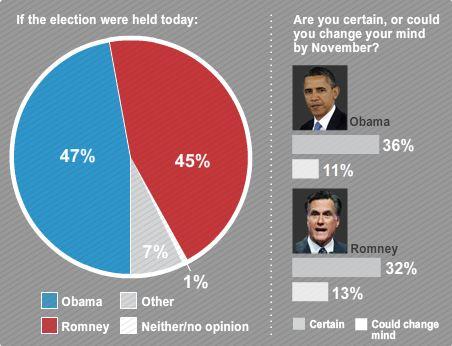 On the campaign trail and in media interviews, Mitt Romney is usually very cautious, making bland comments on the issues of the day. In “off the record” chats with major donors, he obviously tells the real unvarnished truth. It is time some of this real truth made its way into his campaign speeches.

According to the lame stream media, his presidential campaign is now consumed in another sham controversy. The candidate appeared at a hastily arranged news conference late last night to respond to a leaked video taken at a fundraising dinner May 17 in Boca Raton, Florida.

In his supposedly private comments, Romney also stated that his "job is not to worry about those people……I'll never convince them they should take personal responsibility and care for their lives….What I have to do is convince the 5 percent to 10 percent in the center that are independents, that are thoughtful."

In the event, Romney was basically telling the truth as there are a huge portion of Americans who pay no income taxes and receive government services. Most, but not all, of these voters will support President Obama, while the majority of taxpaying citizens will cast their ballots for Romney. In this election, like so many others, both candidates will be appealing to the small number of independent voters in the middle.

As a Massachusetts moderate with a very mixed record on a number of issues that concern Republican voters, Romney also needs to be concerned about keeping his base happy and making sure these conservatives vote on November 6.

In recent weeks, Romney has made a number of stumbles. For example, in an interview on “Meet the Press” he said he would retain parts of the President’s healthcare plan. This is anathema to conservatives who used the healthcare bill to motivate millions of voters in the mid-term election.

In those comments, Romney may have been trying to win the support of his liberal interrogator, but he needs to realize that, as a Republican, he will never have the backing of the news media. He only needs to look at what happened to the media’s favorite Republican, John McCain, in the 2008 presidential campaign. In contrast, Romney must have conservatives on his side if he has any hope of victory in November.

In this election, Romney is not only facing an incumbent President, he is also running against a united Democratic Party, the labor unions, Hollywood, special interest groups and the media.

He faces a formidable challenge, but polls show a tight race. The latest Gallup poll has Obama with a slim 47-46% lead, basically a dead heat.

To win, Romney needs to push three issues: the economy, energy/high gas prices and national security. The President’s weaknesses on the economic and energy issues are pretty self evident.

With the anti-American uprising in the Middle East, national security has also been added to the mix. Romney can make a case that the President’s policies have been weak and ineffective. Even with Obama showing support and empathy for the Muslim world, there have been violent protests, the storming of our embassies and the burning of the American Flag in over a dozen countries.

The most serious tragedy involved the tragic death of four Americans in Libya including our Ambassador. This was the first time in 33 years a U.S. Ambassador has been murdered on foreign soil. It seems the whole incident was avoidable if proper security had been in place and if the administration had listened to the Libyan government that warned of a 9/11 inspired attack.

Despite Obama administration spin, the killings did not occur because of a crude anti-Muslim movie. Such a position is preposterous and conflicts with the statements of numerous Libyan officials.

In this campaign, there are many openings for Romney, he must seize them and talk directly to the American people. He should be asking where was the security for the Ambassador and why didn’t we listen to warnings about an attack? He needs to be direct and forceful just like he was in the leaked video and tell the truth to the American people about the economy, energy and national security.

The American people can handle the truth; it is time to stop coddling the voters. We are facing dangerous times and cannot continue down the same path of deficits, high gasoline prices and coddling radical Islamists.

If Romney has the courage to make the case and is committed to this message, he will encounter tremendous pressure from the Obama campaign and negative spin from their many friends in the media. However, if he perseveres, he will win the election.

muslim--
Jeff Crouere is a native of New Orleans, LA and he is the host of a Louisiana based program, “Ringside Politics,” which airs at 7:30 p.m. Fri. and 10:00 p.m. Sun. on WLAE-TV 32, a PBS station, and 7 till 11 a.m.weekdays on WGSO 990 AM in New Orleans and the Northshore. For more information, visit his web site at www.ringsidepolitics.com. E-mail him at [email protected].