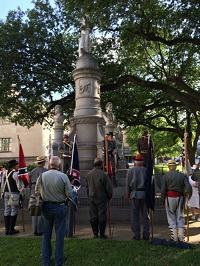 by Jeff Sadow
Like herpes, the manufactured conflict of the display of the (Third) Confederate (Battle) Flag keeps coming back, but in the latest outbreak including the passengers of Confederate memorials of any kind. Ironically, reactions to a repressive regime of the past invite a different kind of repression.

The latest controversy, kicked off by a tragic mass murder in a South Carolina church, quickly descended into nonsense when that led to intensified cries to banish the flag from polite society.
Never mind that the alleged killer didn’t burst into the house of worship and proceed to impale people with poles with that flag hanging from them. The only connection the flag had to the incident was he was pictured with one and he appears to be a white supremacist (having tried and discarded other extreme views). In particular, complainers wanted these flags removed from government property.
As this space has noted previously, flying this flag as a singular symbol adds nothing to the public weal. While it can represent admirable qualities of a society over which it flew, the fact is it also was the banner of a breakaway enterprise set against many other admirable qualities of American society,
And, as its leaders admitted, primarily because they wanted to continue slavery. So it if one wants to celebrate certain values, why not choose to fly the American flag, which has the presumed same positive aspects as any version of the Confederate flag, minus the baggage of condoning slavery?
Thus, a few years back Caddo Parish removed the flag from its property on which also rests a monument not its, but of the United Daughters of the Confederacy. Now, some local interests want to remove this as well (at a cost to taxpayers of $300,000). In cities across Louisiana, other memorials to Confederate States figures or the rebellious states generally have generated similar requests.
But to do so creates the potential to promote historical ignorance. When in isolation, American or Confederate flags convey a symbolism; as noted above, for the former a set of positive attributes but for the latter perhaps the same but also a very big negative one.
Hence, when government property displays one singly, an undiluted message gets sent out. However, put those flags together and maybe the several others under which Louisiana has existed and there you have a historical lesson.
This applies to such symbols generally. We had a rebellion way back when, for some meritorious reasons but also one very bad reason which rendered the whole project as unnecessary and damaging.
We learned from that mistake and good came out of it. And the monument of Confederate figures in front of the Caddo Parish Courthouse reminds us of the darkness of that episode, that redemption had to follow for the country to meet its ideals (even as in practical terms that took a century to achieve in full), and that Shreveport played a significant role in that flawed state, especially in that this parcel was the last capitol of the misbegotten enterprise. Moving the monument defeats these understandings.
Similarly, the state allows a specialty license plate for the Sons of Confederate Veterans, of which over a hundred have been issued, which has emblazoned upon it the flag. It is not a matter of free speech to have to offer it, the courts have ruled, and some interests want the state to stop its production.
Generally, if a law allows for such a plate, vehicle owners are free to request them for extra payment and if a critical mass is reached they are made (in this specific case, the additional funds go towards funding history textbooks).
But the fact is, the group’s ancestors didn’t march under the Jolly Roger or rainbow flag, but under the Confederate battle flag and that is part of the group’s official logo. Some of those ancestors were racists who supported slavery, but it’s probably a rare SCV member now that wants to put black people in bondage.
To single out the flag aspect of the design that reputedly espouses hate, intentionally divorcing it from its larger context, is a disingenuous attempt to make the group as a concept conform to what the perpetrators want it to be, not what it is.
Thus, the state should continue to offer the plate, and Caddo Parish should not move the monument. Things are what they are, not what special interests wish them to be in order to advance their political agendas.
Such agendas have far less value than understanding the actual meaning conveyed by the symbols in question; to paraphrase George Santayana, those who cannot understand accurately the past are doomed to repeat it.

More in this category: « Jindal strikes out, US Supreme Court poll New Orleans crime wave heats as Landrieu waves at confederate symbols »
back to top