by Lamar White, Publisher of Cenlamar.com
Four days ago, Gov. Bobby Jindal publicly excoriated Hillary Clinton on Twitter, accusing her of concealing her e-mails from the American public and implying that she had compromised national security by utilizing an e-mail server maintained from her home.

“While the American people will never see all of Hillary’s e-mails,” he tweeted, “it is likely the Russians and the Chinese already have 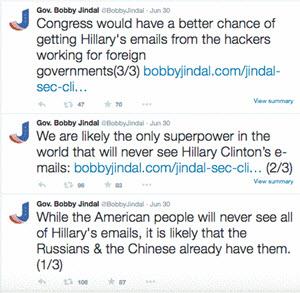 Although Secretary Clinton’s exclusive use of a private e-mail server is regrettable and, to some, even inexcusable, she has already turned over thousands and thousands of e-mails and has committed to releasing a total of least 55,000 in the weeks and months to come.

But Jindal wasn’t finished: The next day, he claimed that Secretary Clinton had “created a major breach of national security” by electing to use a private account and not her government-issued address. “She has already edited the e-mails,” he said, “and has already destroyed the ones she did not want us to see, which makes the whole thing a meaningless charade.”

Notably, this is not the first time Gov. Jindal criticized Secretary Clinton for failing to maintain her e-mails on a government server. When the story first broke in March, Gov. Jindal was ready to pounce.

There’s just one enormous problem: Not only did Gov. Jindal refuse to release his own e-mails after requests made by both Elizabeth Crisp of The Advocate and by yours truly, reports have circulated, since at least 2012, that Jindal’s top aides use their own private accounts to discuss the public’s business.

Jindal’s phony outrage over Secretary Clinton and his absurd hyperbole about a “major breach of national security” aren’t only incredibly cynical, they’re also stupidly hypocritical. In Jindal’s seven and a half years in office, he has yet to disclose a single e-mail.

According to three different sources, Gov. Jindal communicates almost exclusively via e-mail through his private account, which is apparently hosted by Gmail. In fact, the use of private e-mail accounts among his executive staff is not only pervasive, it’s encouraged. “When they first came into office, they really did believe that if they kept everything on their private accounts, it’d never be public record,” a former staffer from Jindal’s first term told me, on the condition of anonymity. This account was corroborated by others with intimate knowledge of the Jindal administration.

Read the rest of this column at the original source, Cenlamar.com