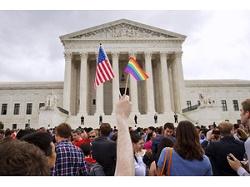 While the debate over same-sex marriage is over right now in the US Supreme Court, it surely has shelf-life in the polls and the voices throughout America.

An African American group of clergy are speaking out against the decision, following the path, as they say,  of Martin Luther King.  Also, according to a recent poll, small businesses are on the side of rendering same-sex wedding services rather than denying them.

Also, in the news are interesting tweets and posts of the day involving Louisiana and US politics, including Paul Hollis support of David Vitter, Supriya tweeting or Bobby Jindal and of course, more Donald Trump:

Rev. Bill Owens, President and founder of the Coalition of African American Pastors, Dr. Steve Hotze, President of Campaign for Texas Families; and David Pickup, LMFT of the Children’s Center for Healthy Gender and Sexuality, are holding a press conference to call upon millions of Christians and people of faith within all of America’s businesses, professions, churches and states congresses to prepare for mass civil disobedience in regard to the recent U.S. Supreme Court’s ruling on homosexual marriage. We are calling on Christians and people of faith in all areas of society, especially those in leadership positions, to refuse to obey unjust laws that have legalized same-sex unions, and to join our movement that will take back our Constitution and our rights.

“It’s a disgrace that five unelected judges can overturn the votes of over 50 million Americans so that a few homosexuals can marry,” says Rev. Owens. “These justices got it wrong like they did in the Dred Scott case. We stand with all Americans who resist the SCOTUS ruling and we will follow Dr. Martin Luther King Jr.’s example and we will not obey an unjust law. It’s time that we elect politicians that will honor the will of the people and not cater to special interest groups. I am disgusted by the Liberal agenda that is trampling on the Constitution and antagonizing those of us who believe in faith, marriage and family. CAAP is calling on all Americans to push back against these anti-Christian policies and join our RISE campaign and take back America and restore common sense principles and values,” added Rev. Owens. Join RISE by visitingwww.caapusa.org.

New polling shows entrepreneurs strongly believe small business owners should not be able to refuse goods or services to LGBT individuals, or deny services related to same-sex weddings, based on owner’s religious beliefs

The poll, conducted April 16-24, 2015, by Greenberg Quinlan Rosner Research on behalf of Small Business Majority, the Center for American Progress, and American Unity Fund, found two-thirds of small business owners say businesses shouldn’t be able to deny goods or services to someone who is LGBT based on the owner’s religious beliefs. When asked about wedding-related services, 55 percent say they do not believe a business owner should be allowed to deny services to a same-sex couple based on religious beliefs. In fact, 59 percent of small business owners responding to the poll oppose laws allowing individuals, associations or businesses to legally refuse service to anyone based on religious beliefs.

The survey responses crossed ideological and religious divides, with a plurality of small business owners (47 percent) who identified as Republican, 33 percent as Democrat and 19 percent as independent. Survey participants reported varied faith traditions, as well, with 27 percent who regularly attend religious services. Out of those who identify as Christians, 25 percent identify as born-again or Evangelical Christian.

“Our customers are people from all types of backgrounds who are newly engaged and excited about their future,” said Michelle Payton, owner of the Bride's Shoppe in Great Falls, Montana. “People in love are the people that keep us in business, so it makes good business sense to offer my services to everyone, regardless of sexual orientation. Additionally, serving LGBT people is in line with our philosophy of helping all of our customers make their dreams come true.”

Roughly 30 U.S. states, as well as the federal government, currently lack explicit LGBT non-discrimination protections throughout daily life. The poll shows small business owners support enacting protections for LGBT people that would ensure everyone receives equal access to public accommodations and employment, regardless of sexual orientation or gender identity. Six in 10 small business owners oppose firing or refusing to hire someone who is LGBT based on the owner’s religious beliefs and 8 in 10 support a federal law to protect LGBT individuals against discrimination in public accommodations, such as restaurants, hotels and other businesses that are open to the public.

“The topic of religious freedom and how it relates to business practices has been front and center in the media. And once again, small businesses are in the middle of the debate,” said John Arensmeyer, Founder & CEO of Small Business Majority. “As these results make clear, our nation’s biggest job creators support policies that are fair and inclusive to all customers and employees.”

“The results of this poll reinforce that business owners see little conflict between expressing their religious beliefs and supporting LGBT-inclusive non-discrimination protections,” said Dr. Laura E. Durso, director of the LGBT Research and Communications Project at the Center for American Progress. “Treating LGBT workers and customers fairly is not only morally right, but also good for business, which is why its past time for Congress to pass a comprehensive LGBT non-discrimination act.”

"It's not surprising that a majority of small business owners are opposed to any law that would allow discrimination against customers based solely on the fact that they are gay or transgender,” said Tyler Deaton, Senior Advisor at American Unity Fund. “The notion they would single out and deny services to a certain group of customers is at odds with operating a successful business. Keeping the marketplace free from discrimination fosters job creation and a healthy economy.  Any effort to demean any customer is just bad business.”

It’s important to note that respondents in the poll are largely made up of mom-and-pop type businesses, with 81 percent of respondents reporting that they have fewer than 10 employees and a quarter are in retail, retail services or the service industry. The poll reflects a sample size of 500 small business owners across the country. The margin of error +/- 4.38 percent.