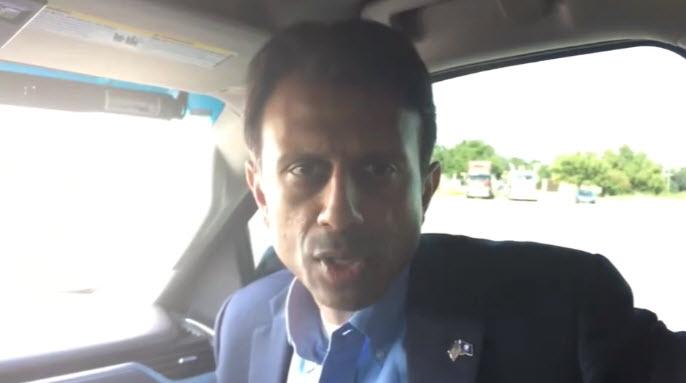 Yesterday, presidential candidate, Louisiana Governor Bobby Jindal created this video which was posted on his Facebook page regarding the controversial allegations of  Planned Parenthood selling of fetus body parts.  The video was posted on his campaign Facebook page and he also launched an investigation into the potential criminality of the claim.

Here is the statement his state office communications department released:

Today, GovernorJindal announced he is directing the Louisiana Department of Health and Hospitals to launch an investigation into Planned Parenthood after reports surfaced alleging some Planned Parenthood affiliates are using partial birth abortions to sell fetal body parts.

A video surfaced showing a Planned Parenthood Federation of America senior director describing how some Planned Parenthood employees are actively engaging in illegal partial birth abortion procedures and attempting to conduct these abortions so that they leave body parts intact so that they can later be sold on the open market.

GovernorJindal said, “Today’s video of a Planned Parenthood official discussing the systematic harvesting and trafficking of human body parts is shocking and gruesome.  This same organization is seeking to open an abortion clinic in New Orleans.  I have instructed Louisiana’s Department of Health and Hospitals to conduct an immediate investigation into this alleged evil and illegal activity and to not issue any licenses until this investigation is complete.  I am also asking the FBI to assist DHH in investigating this alleged criminal activity by this organization.”

The controversial video is below:

The Facebook post discussion shows how difficult and emotional is the subject of abortion, especially in the parameters of an election season.

There is a question whether the video was edited to make it appear the planned parenthood was selling the body parts rather than simply doing what other medical providers do, which is to donate body parts.  Also, there is an issue as to the possible bias of the organization promoting the undercover video.

The center's leader, David Daleiden, has written anti-abortion literature forThe Weekly Standardand is referenced on the pro-life website of Jill Stanek. Files uploaded by Daleiden to Scribd include "Prayers for the day," which Daleiden describes as "one way to structure your prayer life throughout the day that some people may find helpful."

Though Daleiden's organization shares a name with the Manhattan Institute's Center for Medical Progress, a spokeswoman for the institute toldNewsweekthe groups are "totally separate organizations" who have "never been affiliated." This is all to say, the video was not made by a purely scientific center, despite the organization's name, nor in a purely objective manner.

The video made by Daleiden purports to show Planned Parenthood's senior director of medical services discussing the sale of body parts from aborted fetuses. Dr. Deborah Nucatola sits at lunch with actors, who posed as members of a fetal tissue procurement collection company. Though the sale of body parts of any human is illegal, donating tissue is entirely legal in the United States, so long as there is no profit from it.

Here is the statement from Planned Parenthood

In health care, patients sometimes want to donate tissue to scientific research that can help lead to medical breakthroughs, such as treatments and cures for serious diseases. Women at Planned Parenthood who have abortions are no different. At several of our health centers, we help patients who want to donate tissue for scientific research, and we do this just like every other high-quality health care provider does -- with full, appropriate consent from patients and under the highest ethical and legal standards. There is no financial benefit for tissue donation for either the patient or for Planned Parenthood.  In some instances, actual costs, such as the cost to transport tissue to leading research centers, are reimbursed, which is standard across the medical field.

A well funded group established for the purpose of damaging Planned Parenthood’s mission and services has promoted a heavily edited, secretly recorded videotape that falsely portrays Planned Parenthood’s participation in tissue donation programs that support lifesaving scientific research.  Similar false accusations have been put forth by opponents of abortion services for decades. These groups have been widely discredited and their claims fall apart on closer examination, just as they do in this case.

More in this category: « Landrieu's statue removal is ploy to divert attention from crime horrors La. Demos slam Schedler, Jindal does Iran, gets $ but no bounce; Fleming slaps Obama »
back to top