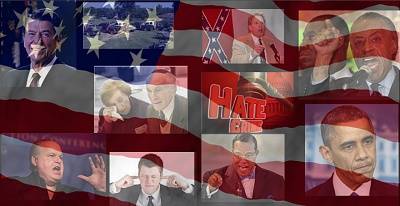 Yesterday, I posted on Facebook, a picture of some men in trucks and vans getting ready to wave the confederate flag in front of President Barack Obama.

A friend, whose Facebook image sports a rebel carrying a flag--that was the symbol of her university until it was taken down--was actually pleased that those people in Oklahoma were waiting for the President and that they would project this symbol of what I call—a symbol of hate and defiance.

My friend however, called it Southern pride.{snippet 255}

I expressed my obvious displeasure and disagreement, feeling that if one wanted to show their displeasure with a policy or political personality-- there would be a less odious way to do so.

Another Facebook acquaintance remarked if I’m not proud of the South, then why am I here?

Let me respond to this rather unfortunate exchange in the “public square of ideas”.

If someone wants to be proud of the South, then, be proud about what makes it unique.  For the most part, we have loving and hard-working people, with charm and grace.  Our economies are doing better than most other regions and as a result, we have a chance to lead this world in those things that we do well.

However, where we should not be proud, is when our anger overtakes our sensibilities, and our passions overtake our compassions.

The confederate flag means much to a lot of people.  To some, it might be “state pride” or a sense of belonging to a day- gone- by.  And to others, it means the right to self-determination.

To others, it is an image of hate and of white supremacy.  To me, it is “akin” to the swatstika.

From my perspective, waving it in front of the first African American president is like calling him the N-word.

From my perspective, brandishing the confederate flag in front of this president would be like the Nazis marching with swatstikas in a Jewish neighborhood, as they did in Skokie Illinois--a community with a large holocaust population.

That is what it means to me.  Maybe not to you, but to me.

This does not mean that those who honor the confederate flag are bad or evil.  I believe a vast majority of them are loving people who see their world being destroyed, who cherish what they have known and who want to restore it, anew.  They believe in family, God and country.  They are the bedrock of this nation and they possess sincere qualities that make this nation great.

Some of them get offended when they learn that I have these views.  They want to destroy my perception of what they believe is sacred.  I likewise get unnerved when I see people use, in my world, displays of hate to show and express their anger and frustrations.  As a result, we are met with a real disconnect, raw feelings and fear of one another.

In certain ways, I think I have a vantage point that differs from so many of my friends.  I lived through the days of Jim Crow.  I saw how blacks were dehumanized.  I know I never even talked to a black person-- other than our own “house-maids”, until I was 18 years old.  Back then, I was institutionally taught that black people were inferior to “us” whites.  We called them “Negroes” back then.  Those visual memories of my feeling superior are difficult to suppress.   As more people like me leave this world, those memories will be difficult to remember.

If this region is truly hoping to achieve success and if this New South is really going to rise again, we must strive to accept that our own world views are not the gospel.  White and black might be opposites but in reality, they are the same-- just one lacking light.

Somehow we need to shine the light upon our hopes that we can make ourselves better without making others subjected to inferiority.  Somehow we must rise above the anger that engulfs us and somehow we must try to understand the views of others, even if we deplore them deeply.

Our world can indeed be a better place if we ask how we can all make it better.  We must do that together.  We might not ever get there.  But, without trying, the insecurities that are in all of us will eat away our souls.

PLEASE DISCUSS THE COLUMN/VIDEO BELOW

More in this category: « La. Biz News: Aspen Institute, BRAC and no Louisiana city as worst to drive Louisiana didn't miss the Garth Brooks dance »
back to top