Jindal and Vitter have the constitution to swallow those campaign dollars 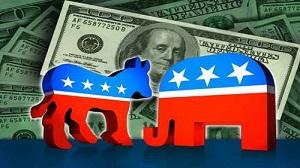 Two emails popped up on our computer on Wednesday that we simply could not ignore and while the messages concern men who have an intense dislike for each other, the emails are nevertheless related in ways that should offend every votercitizen in Louisiana.

If you were not already turned off by Bobby Jindal and David Vitter, these should do it. If not, then you are part of the problem.

The first is a response to one of our readers from U.S. Sen. David Vitter, the odds-on favorite to become Louisiana’s next governor.

Our reader had written Vitter to ask for his support for a constitutional amendment to overturn the 2010 Citizens United Supreme Court decision that said corporations and unions may not be restricted from spending money to support or denounce individual candidates in elections, in effect giving corporations the same rights as citizens. (The exception is that citizens may be sentenced to prison terms for white collar crimes while corporations may only be fined—usually in amounts far less than the financial gains realized from the criminal activity.)

Anyone who still does not see the manner in which money buys elections in this country—from legislators all the way up to president of the United States—either is a special interest lobbyist, a corporatist power broker, or someone who lives under a rock.

Vitter, in his response, somehow managed to morph the request for the regulation of campaign finance to the muzzling of free speech. “Thank you for contacting me in support of a constitutional amendment that would allow Congress and states to regulate campaign finance and political speech,” he said.

“As you know,” he said, “more than 40 Senate Democrats are supporting an amendment to the Constitution to allow regulations on political speech during federal elections. This proposal comes in response to multiple United States Supreme Court cases upholding the free speech protections enshrined in the First Amendment.”

Right away, he manages to turn it into a Democrat vs. Republican rather than a bipartisan issue. Somehow, when they get to Washington, they just have to make everything an us vs. them fight—like it would kill them to ever admit anyone in the other party might have a good idea. No wonder Congress has such a low approval rating, right down there with televangelists. And we just as quickly get the feeling that Vitter isn’t going to be very sympathetic to any suggestion of campaign reform. Not that’s any real surprise; a special super political action committee was set up on Vitter’s behalf earlier this year to help catapult him into the governor’s office. That PAC, The Fund for Louisiana’s Future, immediately funneled more than $3 million into his campaign.

But back to his email:

“Proponents of the amendment argue that corporations and individuals should be limited in their ability to indirectly support or oppose federal candidates, but the amendment would grant Congress power to pass new statutory limitations on political speech that could impact anyone,” he said.

“I fear that its adoption would allow Congress to regulate everyone from the Sierra Club to the National Rifle Association, pro-life and pro-choice groups, and could even suppress publishers and producers from releasing new books and movies that pertain to a candidate.”

“Moreover, nothing in this amendment is limited to corporations or billionaires; it could easily include limitations on the rights of every American. A free society must engage in robust discourse in search of truth,” he continued in his self-serving gooneybabble.

“Objectionable speech should be confronted in the free marketplace of ideas where the best ideas win out, not through government regulations.

“Never in the history of the Constitution have we amended the Bill of Rights. I firmly disagree that we should do so now, especially not a right so fundamental to who we are as a nation. Although we disagree, rest assured that I will keep your thoughts in mind.”

So the bottom line is Mr. Vitter, who desires to be our next governor, wants corporations, lobbyists and special interest organizations with the financial clout to continue to buy access while drowning out our voices—to club our ideas, letters, emails and small (read: meaningless) contributions into so much pulp with their millions of dollars.

Mr. Vitter’s version of free speech—speech that favors those who are connected and who have the financial resources to purchase elections and politicians—is precisely what is wrong with the political system in the United States—and Louisiana.

The plain truth is Vitter is trying to purchase the governor’s office with his PAC and well-heeled political supporters who are contributing to his campaign not in the interest of good government but in the expectation of some quid pro quo in the form of contracts or favorable legislation. In other words, the buddy system wins, the state of Louisiana loses.

That email is just the sort of thing that State Rep. John Bel Edwards (D-Amite) should plaster all over every newspaper and television station in the state to show the real manner in which David Vitter views democracy and free speech.

And those views have nothing to do with representative government. They are to be used as a vehicle to roll over honest, hard-working citizens and, in the process, to make them think he’s doing them a favor. It’s all about convincing the great unwashed to vote against their own best interests by waving the flag and finding new enemies to hate.

The other email was a report in Wednesday’s online edition of the Baton Rouge Business Report, edited by Rolfe McCollister, a Jindal appointee to the LSU Board of Supervisors and who served as campaign treasurer of Jindal’s gubernatorial campaign and who now serves a treasurer of his presidential campaign.

That story said Jindal, who announced he was a candidate for the Republican Presidential nomination just a week before the close of the second quarter fundraising period, raised $578,758 in that first week.

In all, he has raised more than $9 million, with the bulk of that (more than $8.6 million) raised through super PACs—the American Future Project, Believe Again, and the America Next non-profit—which only reinforces what we said above about the unlevel playing field created by PACs.

The report said that 87 percent of Jindal’s campaign donors contributed $100 or less.

That’s the same kind of garbage he once tried to feed us about the contributions to his governor’s campaign. Trouble is, readers should not listen to what he says but rather to what is not said.

In poring over his initial presidential campaign report (yes, we do that), we found 180 contributors gave the maximum $2,700. That included multiple members of the same household, or in the case of the Madden Construction family in Minden, eight separate Maddens contributed $2,700 each.

The 180 individual donors combined to account for $486,000 of that $578,758. Two of those donors were listed as giving additional checks of $5,400 each (which exceeds federal limits, but we’ll leave that to the Federal Elections Commission). Moreover, an organization identified as the Smoke Bend Political Action Committee ponied up another $5,000.

So the point is, the big money donors simply overwhelm the small donors and to say that most of his donors were small donors is deliberately misleading and disingenuous.

But just for argument’s sake, let’s take a look at a few of major donors.

Those are just a few, but they account for $94,500. Not too much in the way of contributions outside Louisiana. Apparently the price of being appointed to a prestigious board or commission is not only to vote the way you’re told (see LSU board’s vote on firing presidents, doctors and attorneys, and on giving away state hospitals) but to pony up campaign funds when the boss comes calling.

Conspicuously absent (with only a couple of exceptions), however, were the names of Indian-Americans who practically lined up to contribute to his gubernatorial campaigns of 2003, 2007 and 2011 before watching in dismay as he began to distance himself from his Indian heritage, claiming that he did not believe in hyphenated-Americans.

More in this category: « Louisiana didn't miss the Garth Brooks dance All down Hillary since Clinton announced her candidacy »
back to top