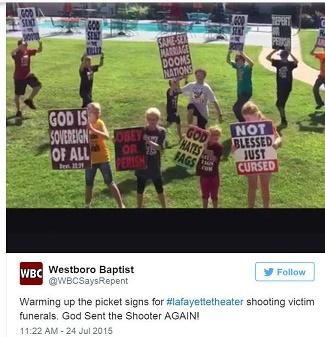 Louisiana Governor Bobby Jindal has issued an executive order to protect the peace during funerals after notice that the Westboro Baptist Church might picket.

The shooter in the Lafayette Louisiana movie theater slaying had posted favorable remarks on social media about Westboro.

Below is a parody song lyrics from the Church, the Jindal press release and executive order, and relevant posts and twitter accounts that reveal background information.

This is a Westboro Baptist Church parody of Alabama's "40 Hour Week (For A Livin)." We call ours "40 Week Of Sinnin."

There are people in this country serving God today
The God who destroyed Sodom’s still alive
With signs, songs, and twitter, they warn you every day
Now fag marriage has a vote of five

This is for the one who says “God loves you,” leading you to hell
Or the one who for fag couples, rings the wedding bell
Or the phony divorced Christian, pretendin’ all is well
For all the raging mobs who howl and scream

You can see ‘em in the churches, where they say that gay’s OK
In the homes and schools of every single town
Working together, the Christian and the gay
They’ll soon burn this nation to the ground

This is for the one who tore the covenant, between a man and wife
Or the one who props the flag up, his idols are his life
Or the selfish hating parents, how they eat their children whole
For all the raging mobs who howl and scream

Today, Governor Bobby Jindal issued an Executive Order instructing law enforcement to enforce Louisiana law that protects against disturbing the peace at funeral services after reports surfaced that certain groups intend to protest the funerals of the two victims. This order will ensure the law is followed and that families and loved ones have the ability to grieve for the lives lost in this senseless tragedy.

WHEREAS,  as an expression of respect for the victims of the Lafayette theater attack, on July 24, 2015, I issued Executive Order No. BJ 2015-15, ordering the flags of the United States and the State of Louisiana to be flown at half staff over the State Capitol and all public buildings and institutions of the State of Louisiana until sunset on Friday, July 31, 2015;

WHEREAS,  Article I, Section 1 of the Louisiana Constitution is titled “Origin and Purpose of Government”, and provides:

All government, of right, originates with the people, is founded on their will alone, and is instituted to protect the rights of the individual and for the good of the whole.  Its only legitimate ends are to secure justice for all, preserve peace, protect the rights, and promote the happiness and general welfare of the people.  The rights enumerated in this Article are inalienable by the state and shall be preserved inviolate by the state.

WHEREAS,  these fundamental rights are ensconced in our federal and state constitutions to form part of the foundation upon which a rule of law exists to protect, and provide for, a civil society safe for all people;

WHEREAS, in times of grief and mourning, the rule of law is especially important to protect the rights of citizens when they are most vulnerable, and any effort to disrupt or interfere with a family’s ability to grieve following the loss of a loved one is a reprehensible act;

WHEREAS,  the Louisiana State Police are charged by La. R.S. 40:1379 to “prevent and detect crime, apprehend criminals, enforce the criminal and traffic laws of the state, keep the peace and good order in the state in the enforcement of the state's police powers, and perform any other related duties imposed upon them by the legislature.”

WHEREAS,  the Legislature has enacted criminal laws intended to maintain peace and order for the public, including La. R.S. 14:103 – Disturbing the Peace:

WHEREAS,  the families, friends, and communities of Mayci Breaux and Jillian Johnson deserve our prayers in the days and weeks ahead as they mourn the loss of these young women killed in the senseless attack at a movie theater in Lafayette, Louisiana;

WHEREAS,  any action by any individual or group to in any way disrupt, interfere, or cause additional suffering during this time of mourning is unconscionable and morally reprehensible;

SECTION 1:  The Louisiana State Police, as charged in La. R.S. 40:1379 with the duty to keep the peace and good order in the state, are authorized and directed to strictly enforce La. R.S. 14:103 – Disturbing the Peace, and take swift and immediate action against any who violate this law, or any other law duly adopted to preserve the peace in this state, by intentionally engaging in any act or any utterance, gesture, or display designed to disrupt the funeral, funeral route, or burial of Mayci Breaux or Jillian Johnson, or take any other actions in violation of law.

SECTION 2: All departments, commissions, boards, agencies, and political subdivisions of the state are authorized and directed to cooperate with the implementations of the provisions of this Order.

SECTION 3:  This Order is effective upon signature and shall remain in effect until forty-eight (48) hours past the burials of Mayci Breaux and Jillian Johnson, unless amended, modified, terminated or rescinded prior to that time.

IN WITNESS WHEREOF, I have set my hand officially and caused to be affixed the Great Seal of Louisiana, at the Capitol, in the city of Baton Rouge, on this 25th day of July, 2015.

ATTEST BY
THE GOVERNOR

More in this category: « Trumpsters vs. GOP, a conservative revolt in motion Lightning strikes Louisiana governor race polls: Edwards or Vitter on top? »
back to top