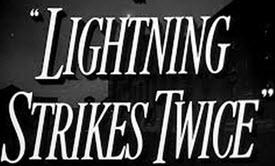 Pollster Verne Kennedy of the Alabama-based Market Research Insights (MRI) wants to correct poll results tracking the Louisiana gubernatorial election.  He feels the information that has been reported in the media does not reflect the poll results.  He says that TheInd.com (and later,  other media), citing a June poll he conducted, has reported Democrat John Bel Edwards, is leading Republican US Senator David Vitter by a margin of six points 30 to 24.   Instead, as of the time of the relevant June poll, Kennedy says Vitter was in front of Edwards by two percentage points.

This is the second time this campaign season, lightning has struck compelling Kennedy to clear up misinformation made public.

The first bolt struck a few weeks ago involving another one of his gubernatorial polls.   At that time, Kennedy felt certain representations being made by gubernatorial candidate republican Public Service Commissioner, Scott Angelle’s campaign publicly presented information related to a poll conducted in May, was misleading.

The representations that Edwards led in the last poll conducted in June, is the second bolt to strike.

How can polls disseminated to the public present such wrong conclusions?

As far as these two polls, I hope to explain below, but first, a preliminary matter.

On Friday July 24, Verne Kennedy sent me a press release about the most recent survey issue, the poll of  June 2015.  I then requested to interview Kennedy by telephone, so I could get a better understanding.

Kennedy explained that in the four-person contest, Senator David Vitter leads Edwards 28 to 26 percent of the voters with Public Service Commissioner Scott Angelle picking up 15%, Lt. Governor Jay Dardenne with 10% and 21 percent undecided.  The pollster said the 600 sample survey had a 4.1% error factor and was conducted June 23-26, 2015.

TheInd.com last week, in an article Gov. race: Edwards leads as Vitter skids, reported that Edwards led by six points.  Again, Kennedy says the news report is not correct, Vitter leads by two percent—an eight percent differential between what TheInd.com reported and the results claimed by the pollster.

So, how did TheInd.com, according to Kennedy, report poll results that has made Kennedy feeling he needs to publicly correct TheInd.com’s numbers?

THE GROUP MEMBERS HAVE THEIR FAVORITES

For years, Kennedy has been polling for a group of well-heeled political “movers and shakers”, a group that includes John Georges.   Georges, is the former gubernatorial and New Orleans mayoral candidate, who now publishes The Advocate newspapers.  Currently, according to Kennedy, the group is made up of roughly 15 individuals who have commissioned him to conduct monthly surveys.  The June poll was intended to be confidential, internal to the group.   However, as things often go in politics, various members of the group favor different candidates and want to help those they prefer.

As Kennedy said in the phone interview, ““The members, "have their favorites".

Kennedy said it appears one of the members apparently favoring Angelle released poll information weeks ago that did not represent true results.  In so many words, the pollster claims the Angelle camp claimed their candidate had spiked up to 18 points after being in single-digits.  In the phone interview, Kennedy does not dispute that when calculating the actual poll “votes” with the “leanings”, that poll tally added up to eighteen.  However, Kennedy took exception to the premise that his poll was being used to reflect the surge up to 18 points.  He feels the Angelle camp was not comparing apples to apples.  The pollster said if the before and after polls were comparing “votes” and “leanings”, then the jump to 18 percent would have arguably legitimate.  He contends that in tallying the May vote and leans, Angelle did receive 18 percent, but where they went wrong was comparing it to the prior poll, conducted by somebody else, that only calculated the actual votes.

Kennedy reports that he has polled the race for this group twice, once in May from which the Angelle dispute occurred and again in June, which the Edwards-Vitter numbers issue has arisen.

Kennedy said, “the poll is not really intended to be released but when inaccurate information has been released by one of the members, "then I have a professional obligation to correct that".

Which correction he made to the numbers being represented by Team Angelle.

“In the first one with Angelle, I do not want to hurt the guy, but the release (of the poll) hurt him, my release to correct what they have done which they never should have done”, Kennedy said.

THE SECOND BOLT: WHO’S ON FIRST, EDWARDS OR VITTER

Kennedy said in the interview, another group member must have wanted to help another candidate, thus, apparently provided TheInd.com with poll details that presented an inaccurate conclusion when the online publication published its article claiming Edwards with the six point lead.

The Alabama pollster does not know whether the group member who released the information to TheInd.com, gave  it the complete poll or just the incorrect question which was reported.  He assumes it was the former and not that TheInd.com received the entire survey and simply misreported.  (I also commented on TheInd.com's article last weekwith some disbelief, "Pulling the plug on Jon Bel Edwards and Bobby Jindal’s surge in polls", assumed the accuracy of the report, but feeling that Vitter would be still be the man to beat, given his campaign warchest and difficulty that Edwards would have in peeling off votes from Angelle and Dardenne.

To better understand what appears to have occurred, it would help to understand how the June poll was constructed.  This is the way Kennedy explained the poll structure to me:

Then, the next two questions are the “Real McCoys” in determining the poll rankings. 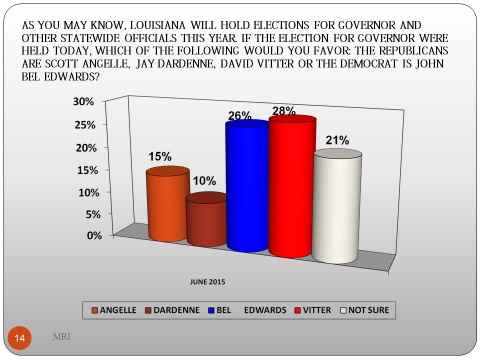 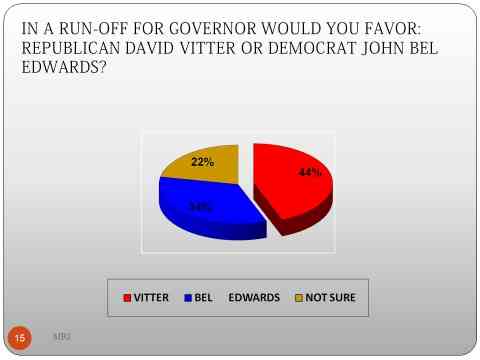 Kennedy said these two questions provide the accurate details of the poll (the numbers in red circles represent the power-point slide number the pollster provides the members, not the question numbers).  Thus, according to the June poll questions, Vitter leads by two and is up by ten if Vitter and Edwards faced each other in the runoff.

However, the poll doesn’t stop there.  The next series of questions contain numerous “what if” scenarios.   Kennedy constructed a battery of neutral, positive and negative questions and then polled the voters based upon this information.  Included In this batch of questions are anticipated “attack” claims that might be expected to emerge during the campaign.  Kennedy said, all candidates were negatively hit equally.  Included in the attack question against David Vitter was the matter of the prostitution scandal.  He said he does know what the individual members do with the survey but suspects that some want the information before supporting a particular candidate.

He says the group member appears to have provided to TheInd.com a question after the “what if”  series of “candidate information questions” which would explain a theoretical six-point lead by Edwards.  The accurate result (the questions above) however, did not include any additional information or “what if” information provided to the persons polled.

Here’s how Kennedy explained it:

“This survey we had maybe 20, 21 issues which were either positive or negative hits that we thought might be used against the candidates”.  “When people answer that question they heard about 25 negative statements against all these people including the prostitute thing”  and “some types of things on the others and that's not represented because you created a bias responded by giving them information that they may not know”.

I can look at how an individual has responded to a candidate before hearing the information and then afterwards and we also ask him, especially on the negatives, we asked them if it makes them more a less likely on a five-point scale to vote for the candidate.

Apparently, as reported by TheInd.com, included in the poll was a question that measured John Georges as a potential candidate.

The next survey (July) will be conducted this week.

Obviously, the pollster hopes lightning won’t strike thrice coming from one of his surveys intended to be private.

Bayoubuzz Note:  Below is the press release I received from Kennedy last week.  Also, I have not seen the poll, nor am I requesting to see the poll or crosstabs because the poll was never intended to be published.   The purpose of this article is not to reveal the poll results but to share to our audience how the process reportedly works for this member group, why the pollster felt compelled to publicly correct misinformation and how members, for whatever reasons they might possess, want to help their favorite candidates.

Market Research Insight, Dr. Verne Kennedy’s survey research firm, is conducting a series of statewide Louisiana surveys monitoring the campaigns for Governor and other statewide officials on a monthly basis.  About fifteen business people from the state have formed a group that commissioned this research.  Survey results are not intended for public release.  However, when results are leaked to the media that are either not accurate or imply things other than the survey discovered, MRI must correct the inaccuracy or false impression.

INDReporter recently has an article which said MRI’s latest survey had results which were; “Edwards with 30 percent support in the race, followed by Vitter at 24, Public Service Commissioner Scott Angelle at 14 and Lt. Gov. Jay Dardenne at 12 percent.”  These results were from a post-issue question which, after respondents reacted to a series of questions, some positive and some negative, concerning all the candidates which, of course, changes voter opinion and do not represent actual survey results without influencing voter opinion.

This release is in no way critical of INDReporter news coverage.  MRI has no information if the online publication had any knowledge that the information given was not an accurate reflection of MRI’s survey results.

The initial ballot question and a Run-Off question asked before any comments were made about the candidates are depicted below. All candidate names were randomized or rotated to avoid first name bias. The graphs below show combined vote and lean results.  The survey contained 26% African American voters and all other demographic characteristics reflected the makeup of voters likely to take part in the upcoming Louisiana elections. Anyone with questions concerning the 600 sample survey with a 4.1% error factor conducted June 23-26, 2015 should contact Verne Kennedy (850) 385-7040 or email [email protected].

Discuss the article below