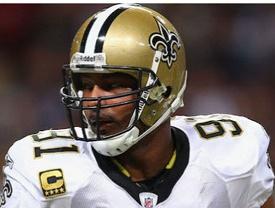 by Jim W. Miller
You can look at the Saints’ excommunication of Junior Galette from different points of view and all come to the same conclusion. Good riddance! Opinions are like a left elbow - everybody has one – but how each of the affected constituencies greeted the team’s sudden termination of the team's sacks leader tells a lot about Galette’s impact on last year’s 7-9 record and this year’s prospects as well. The pertinent points of view in the Galette case boil down to these three: The fans, the locker room and the organization.

Who Dat Nation’s viewpoint is usually emotional, rarely logical and always subject to further review. I can see the little old lady in Luling fussing and cussing after she first learned that the team cut bait on one of its better on-field performers. Neither she, nor her more rabid brethren and sisteren, can understand why a team pays a player a king’s ransom then less than a year later cuts him? Salary cap, salary schmapp! Which fans really care about the money? All they care about is that another good player is let go at a time when the team needs every able man on board.
But even the more rabid in Who Dat Nation have friends who explained that Galette is facing at least a six-game suspension for allegations of domestic abuse and a troublesome video of him playing beach-blanket bingo on a woman’s head, which could increase the penalty. He would not have been on the field for half the season, which doubtless would affect his productivity during the other half. By all accounts, Galette is a bad guy whose most significant impact would be to figuratively "poison the Gatorade" this year as he allegedly did last season. Now that you know all that, my dear, how do you feel? That’s what I thought. And the fans shout: Good Riddance!
Speaking of the locker room, look at Galette’s termination from the viewpoint of his current and former teammates. Apparently, neither group shed enough tears to douse a firefly’s flame. Some have suggested publicly that Galette’s big contract last year prompted him to abandon all similarity to the small-college free agent who fought the odds to make an NFL roster and appeared damned appreciative of the opportunity. As one former teammate said, once Galette got the money, the “real” Junior Galette surfaced. That was the same Galette who was run out of Temple University for his behavior, kept his mouth shut long enough at Division II Stillman College to get noticed and then revived his bad self after he cashed the check.
Some players questioned the fact that other teammates voted Galette a team captain last year and then watched as he refused to take on the leadership role that guys like Malcolm Jenkins and Jonathan Vilma took seriously. Instead, Galette believed his status as captain came with a sedan chair, servants and a harem. But now he’s gone and, presumably, those voting for the next captain have learned their lessons. And the players shout: Good riddance!
Management’s point of view, of which I am familiar and generally sympathetic, must first lament the lost dollars that, according to reports, will take up about $5.45 million of the 2015 Salary Cap and another $12 million of the 2016 cap. Galette's release will have little practical impact on the 2015 salary cap. In other words, the $5.45 million that Galette would have counted against the cap (a $1.25 million guaranteed base salary plus $4.2 million in various bonuses) already counts and will simply shift to the "dead money" category. The only dent will be in counting the player who replaces him on the active roster. But the Saints swim in the dead money pool. The team accepted "dead money" cap hits to trade or release several veteran players during the offseason, including $9 million for tight end Jimmy Graham and $6 million for offensive lineman Ben Grubbs. That amounts to about $27 million in “dead money,” or money that has been spent based on prior decisions.
But management also must put a price on the intangibles. Character and chemistry help define such things as organizational reputation and franchise culture, which have an affect on public opinion. And that translates into ticket sales, marketing bucks and respect in the community. For those reasons, cutting Galette was cheap at twice the price. And the front office shouts: Good riddance!
Looks like we have a unanimous vote. The message should be clear to Galette: Don’t the door hit you in the ass on your way out of the NFL.
Visit Jim W. Miller's blog www.JWMillerSports.com

More in this category: « Lightning strikes Louisiana governor race polls: Edwards or Vitter on top? Trump couldn't walk in boots of McCain, other military heroes »
back to top