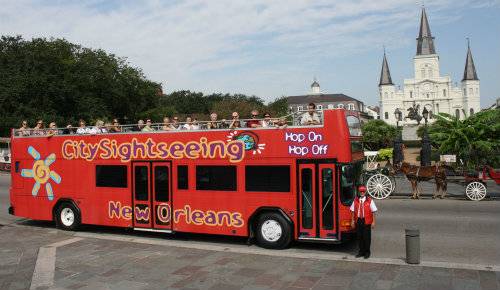 If you happened to be walking around town today in New Orleans and suddenly a huge red double-decker bus emerged into your vision, no you are not in London or Berlin.

Instead, almost probably, you were one of the first to see a new attraction for the very touristy and hospitality-laden town offered by City Sightseeing New Orleans.

The sightseeing company kicked off service with an inaugural tour in downtown New Orleans with tourism and hospitality leaders today. The iconic, red, double-decker buses will offer visitors a new convenient, entertaining, and informative way to experience the Big Easy.

Oh, did we say easy?

“In addition to being an exciting and educational experience, our open-top buses offer visitors and locals the only moving birds-eye-view of the city,” said Emily Valentino, General Manager of City Sightseeing New Orleans, the local company that owns and operates the New Orleans tour franchise. “The hop-on-hop-off model allows visitors to easily reach all of their most desired destinations and enjoy them at their own pace.”

In other words, let your bus do your hopping.

City Sightseeing New Orleans adds another element to a premier hospitality city rich in unique offerings. With the combined impact of 36 full-time positions, related support services and the capacity to transport visitors to locations previously difficult or expensive to access, City Sightseeing New Orleans will add over $8 million of new revenue to the area’s economies, including major attractions and hospitality related businesses.

“We are thrilled to welcome City Sightseeing New Orleans to our ever-growing tourism and hospitality industry,” said Mayor Mitch Landrieu.

Sightseers will enjoy informative and entertaining tours of the city narrated live in English by certified tour hosts. The tour will be unmistakably New Orleans - each bus will be hosted by a local driver and guide, operating as a team, offering their own personalities and knowledge and skills all along the route. Starting November 1st, we will be the only tour in New Orleans offered in seven languages Tour recordings will be offered in Spanish, French, Portuguese, German, Italian, Japanese, and Chinese – and two unique dialects, Cajun and New Orleanian.  There is also a Kids Channel for youngsters.

The hop-on-hop-off buses operate on a continuous transportation loop, stopping at strategic locations along the way. The service offers flexibility for sightseers seeking to experience all New Orleans has to offer. Visitors can spend as much time as they like at any destination, and “hop” back on the bus to complete the guided tour where they left off.

City Sightseeing New Orleans will offer dozens of package options with discounted admission rates at destinations such as the National World War II Museum, Audubon Zoo, New Orleans Museum of Art, Aquarium of the Americas and the Paddlewheeler Creole Queen.

As an added benefit, City Sightseeing New Orleans will now professionally maintain the public restrooms located at Washington Artillery Park.  Restroom hours will be 9 a.m. to 5 p.m. daily, and additionally for special events in and around Jackson Square.

TICKET INFORMATION
Tickets may be purchased online at www.citysightseeingneworleans.com, at ticket offices in Jackson Square (700 Decatur Street) and in Basin St. Station (501 Basin Street), on any bus at any point along the route, and by phone at 1-800-362-1811.

A “cloud” ticketing system allows tickets to be purchased simultaneously online, at retail locations, on mobile phones, and on the tour route.  Ultimately the goal is to link all of City Sightseeing New Orleans affiliate locations, allowing the ability to cross-market and cross-sell each other’s admission tickets seamlessly.

City Sightseeing New Orleans operates from 9 a.m. to 5 p.m. (CST). Tickets are valid for one, two, and three days at the following prices:

Ten percent discounts are offered for seniors (66 and older) and military personnel.

Groups of 25 persons or more, please contact our Executive Sales and Reservations Office at 1-800-362-1811 for group rates.

So, keep on hopping.