Debating about Trump, Republican Party and The Great Society 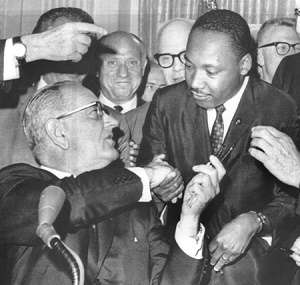 Is it fair to blame the Great Society for the social ills of today? If so, how much blame should we attribute to the programs that were intended to help bring a more balanced society than what existed under Jim Crow in America?

There is no question there were and have been excesses of programs that failed to work under the Great Society and other civil rights legislation and that have contributed to the breakup of society and increased the high level of crime.  But there were also intervening events such as the Vietnam War which set the African-American community back further since so many of our black men were soldiers on the front line. Let us not forget the importation of highly addictive drugs that decimated the black population resulting in increased killings in the street and the incarceration of so many of our African American males. Then of course, we should also remember the Iraq war and the trillions of dollars it has cost our economy which certainly has not trickled down to the urban sectors.

Under no circumstances am I suggesting that the African community during these decades should be cast as victims, without responsibilities. They have played a significant role in the destruction process. Nobody told anyone to take drugs, to have babies out of wedlock and to commit crimes.  In fairness, the white community likewise has been destroying itself and taking advantage of less restrictive morality and the welfare state, so, the downward spiral is occurring throughout our society.

With all of its good intentions there are legitimate criticisms to be made about this part of the American experience. We had not achieved the success as intended. At the same time, how do you go from a society in which much of the population had little or no education, no upward mobility, no access to equal opportunities, no wealth to use for investments, and no respect as a community?

How could the American society evolve to its potential when many in the dominant white community did not want racial equality, did not want to make investments in black education, and refused to hire, promote Blacks in the workplace.

Way too often, I hear that all of the ills of the current society are due to liberals and the Great Society. Indeed, liberals and others made mistakes. We unquestionably need to look at other solutions. We need to make all of Americans less dependent upon government. However, we need to remember that over these decades, a significant part of the white population has not only stood in the doorway of change but has also helped poison the dialogue by viewing the difficulties, always as--us versus them.

On Tuesday morning, Jeff Crouere and I, on our WGSO-Bayoubuzz radio Google hangout discussion, addressed some of these issues in a rather heated debate. The radio talk show focused on Donald Trump, guns, the Lafayette Louisiana shooting and the presidential elections.   Jeff is a great friend, a terrific radio talk show host, made excellent points and is certainly a worthy debate opponent. I share the transcript of our conversation and ask that we try to solve the problems of tomorrow by looking at not just what we should have done, but to consider what society would have looked like, had we continued to dehumanize, oppress a large segment of our population who were only seeking to be equal.

Below is the transcript:

CROUERE: When we had a crisis in the 1960s involving race relation in all this legislation  was passed there's lot of discrimination going on, however, on the positive side, you had 75% of black families were intact, you had two parent families, you had children who were being raised by a mother and a father, now all of these years after the Great Society, all of these years later after all of these trillions on social programs, Steve that has reversed. We don't have a family unit and I've got to point the finger at government policies being one of the reasons why that disintegration has occurred, wouldn't you agree?

CROUERE: You wouldn't agree there's any connection between the Great Society programs, all the money that's been poured in to "saving poverty", the fact that there's still just as much poverty yet interestingly we have the disintegration of the families. You don't see any relation there?

SABLUDOWSKY: I think it's an oversimplification to only blame and primarily to blame the great Society, which in my mind includes the Civil Rights Act, in my mind includes integration of the schools--I think that's really wrongheaded, again, and we've talked about this before--my question is, going back years, roughly 60 years, what would we had done instead?

CROUERE: Well all I know is this, what they tried to use as a solution, failed.  What has been offered as the solution has been an abysmal failure and a point to--with got 50 million in poverty, we've got 47 million on food stamps right now, I point to the fact that we've got crime now increasing in many areas, I point to the breakdown in the families--so we've got all these years of these social programs, which you are saying were beneficial--I'm assuming you are saying, I'm saying they certainly haven't been--all I know is they've certainly have failed, with tried liberalism, why not try conservatism, why not try something else as an answer to these societal ills...

CROUERE: All these things that you think are beyond the pale, and people are all supporting

CROUERE: You called him a clown

SABLUDOWSKY: I think he's a clown

CROUERE: This clown is leading

SABLUDOWSKY: What does that tell me? That tells me there's a lot of people

CROUERE: Maybe you're out of touch with a lot of people

CROUERE: That's out of 16 candidates, there's more than 25% that support that anti-establishment message

SABLUDOWSKY: Jeff, trust me, what he's going to do is going to bring down the Republican down

SABLUDOWSKY: Because the country is actually bigger than you...

SABLUDOWSKY: The country is actually bigger than you, the way that you think, the 25% of the population who support Donald Trump

CROUERE: There's millions of people out there who are sick and tired of what's going on and don't like policies by you, and the media, and the liberals, and the Democrats and the RINO's (Republicans in name only)

SABLUDOWSKY The rhinos, and the moderates and the conservatives

CROUERE: Because you know what, the conservatives have not had a chance, the fact is that your side been winning all of these years and what do we have, we have disaster,

SABLUDOWSKY: But you haven't told me yet Jeff-- I'm waiting for you to tell me how would you have fixed the 60s

CROUERE: How would I fixed the 60s, let's fix today--let's fix all the things that the 60s have caused, the breakdown of the families, the economic

SABLUDOWSKY: Those were the problems now let's go back 60 years and you tell me how you would've done it

CROUERE: How about free enterprise Steve

CROUERE: No we had back in the 60s we had 90% taxes on the top upper echelon, we had a private sector that was being throttled oppressive tax rates--yeah I think we could have unleashed free enterprise, instead of public housing Steve, how about enterprise zones, instead of welfare, how about making people work to getting government benefits, instead of incentivizing the breakup, how about giving incentives for family staying together, there's all kind of things that could have been done through a conservative point of view

SABLUDOWSKY: Liberalism prevailed and of course we've had the disaster we've had

SABLUDOWSKY: Number one, you said giving guns to law-abiding citizens and my question is how do you keep guns away from those people who are not law-abiding? Number two, I agree a lot of things that you're saying in terms of the conservative solutions, my point is, and yes there were excesses in the Great Society, but to say all of it is a failure, that's fine you can say that, but what would have been your solution back then. That is a point that I'm making

More in this category: « Vitter overwhelms, Jindal’s back, Landry gets GOP back, LABI criticized Critics shoot down Jindal’s Lafayette gun response »
back to top