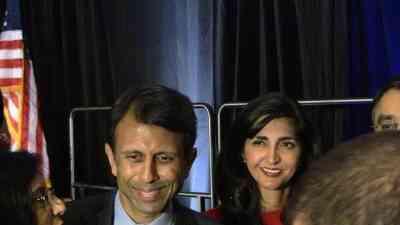 Louisiana Governor Bobby Jindal has not done badly for he and his family, financially, during the seven-plus years serving as the state’s Chief Executive.

Based upon a report today from Reuters, Jindal and his wife worth is between $3.9 million and $11.3 million.

Filings released by the Federal Election Commission today show that the Louisiana governor has 26 investment accounts and a couple bank accounts worth between $3.9 million and $11.3 million.

According to the documents, Jindal earned between $401,000 and $675,000, including a salary of $200,000 from the state of Louisiana and an advance on book royalties of nearly $76,000. (Because the worth of each account was declared within a certain range, it’s not possible to pin down his wealth more precisely.)

Looking back when the governor was running for the state’s top job, Cenlamar reported that Jindal’s personal net worth by 2006 to be between $1.3 and $3.5 million.

Way back in April, when John Breaux was considering whether or not to enter the governor’s race, Dan Z. atJindal is Bad wrote about Jindal’s fortunes in a post entitled “Bobby Jindal the Millionaire?“. Dan did his homework and discovered, through Open Secrets, that in 2005, Bobby Jindal estimated his personal net worth to be between $1.18 million and $3.17 million. By 2006, Jindal’s assets were estimated to be worth between $1.3 million and nearly $3.5 million,making Jindal one of the wealthiest members of Congress (ranked 118 out of 435).

Here is the financial report when he left Congress in 2008

Assuming the accuracy of the information and the report in Cenlamar, Jindal’s income while he was a US Congressman and Louisiana governor could have increased by roughly 7.8 million dollars, in addition to the millions he has raised or which has been raised on his behalf for his PAC’s, organizations and campaign.

TWEETS FOR THE HEAT

US news is either about Trump saying something offensive, Obama being blamed for the weather or footage of somebody being shot by Police!

How to argue your way into the Fox News debate: A guide for candidates http://t.co/bqWPLCOErz

The Obama Administration will investigate the death of a lion, but not the trafficking of baby organs. Shameful. https://t.co/gSDOhukywH

Why are @CarlyFiorina, Pataki, @BobbyJindal, @LindseyGrahamSC even in the race?

"Syria cheated on its chemical commitments. Iran will cheat on its nuclear ones." @StephensWSJ @WSJ http://t.co/wTtDVOWYkx

US news is either about Trump saying something offensive, Obama being blamed for the weather or footage of somebody being shot by Police!

More in this category: « Jindal, Perry support carrying guns in movie theaters, so where are they prohibited? Katrina Anniversary 10: Data on New Orleans rebound, failures »
back to top